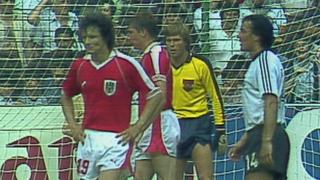 BBC Sport looks back to an infamous match at the 1982 World Cup between West Germany and Austria, when both sides knew that a slender win for the Germans would send both teams through to the second-round at the expense of Algeria.

The match in Gijon indeed finished 1-0 to West Germany, leading to Algeria and neutral fans claiming the game had been fixed - allegations that were never proven despite an official Algerian protest.

The controversy surrounding the match did lead Fifa to ensure that final group games would kick off simultaneously at future tournaments.

Luton captain on facing Chelsea without 'number one fan'