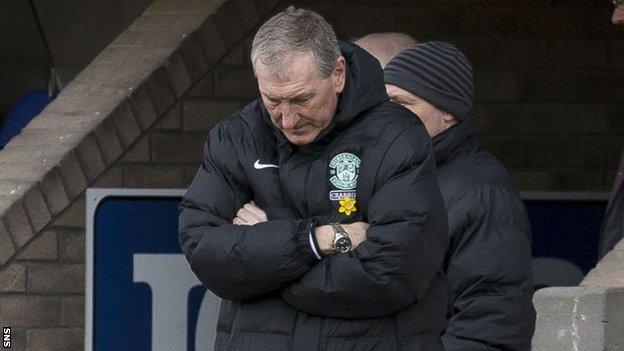 Hibernian go into an Edinburgh derby that could relegate neighbours Hearts seeking points to ensure their own survival, admits manager Terry Butcher.

St Johnstone secured their place in the top six with a 2-0 victory over Hibs, who are left only seven points clear of the relegation play-off spot.

"We certainly need more points, that's for sure, to make sure we do stay up," Butcher told BBC Scotland.

"I never thought we'd say that when we first came here."

Butcher and assistant Maurice Malpas made the switch from Inverness Caledonian Thistle to take over from the departed Pat Fenlon in November.

The Englishman had hoped to steer the Edinburgh side to the top six, but Hibs will now compete in the bottom half of the table once the Scottish Premiership splits into two for the final round of fixtures.

And they travel to Tynecastle Stadium next Sunday in danger of finishing second bottom and facing a play-off to avoid dropping to the Championship along with their city rivals.

Hearts could be relegated before that match, but only if St Mirren take four points from their two games before then, Ross County and Partick Thistle win two points from theirs and Kilmarnock take at least a point in their match away to Motherwell.

"We're in a position now where we've got to roll our sleeves up and work hard to get out of it and that starts on Sunday with Hearts," said Butcher.

"We certainly want to go there and enjoy the occasion because it will be a rip-roaring atmosphere and we've got to match Hearts and be better than them.

"I am confident they can do that as they've done it in the past.

"We've got a big match next week that we've got to pick ourselves up for."

However, Butcher was left unhappy again with his side's inability to convert chances at McDiarmid Park.

"We did really well in the first half in as much as St Johnstone changed their shape round to match ours," he said.

"But, once again, it's powder puff up front. We do ever so well to get up to the edge of the box and then we don't create anything and the final ball's poor and we don't test Alan Mannus in goal."

Butcher made six alterations to his starting line-up, but they found themselves behind to Steven MacLean's 18th-minute strike and an own goal by Ryan McGivern early after the break was followed by a red card for Hibs forward Danny Haynes.

"Sean Murdoch had a fantastic match in goal," said the Hibs manager. "We got the text call in the morning from Ben Williams to say he was in hospital and they are going to break his wife's waters.

"There's only one place he should be and that's with his wife, so Sean came in and did very well.

"Paul Hanlon's got a knee problem, which could be cause for concern, and Duncan Watmore had a knock in training that forced three changes.

"We changed another three to change the system and I think the system worked initially."

"It was definitely a red card - we won't be appealing that," admitted Butcher. "I've seen it a few times now and I don't know why he did that.

"Steven MacLean's had an easy decision to make."