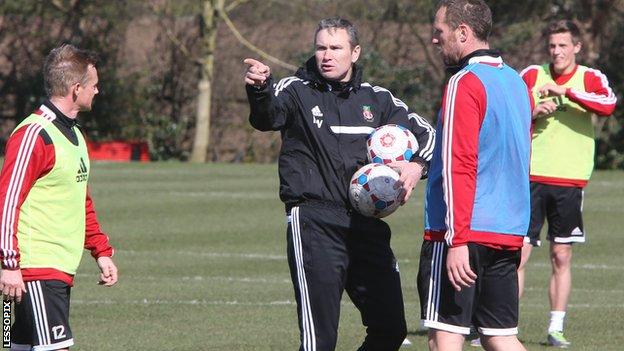 Wilkin held one training session ahead of his first game against Salisbury City.

"The gaffer can stamp his own impressions onto the team," Keates said.

"We only trained once together on Friday so we're obviously looking forward to a full week together now.

"We had a bright session [on Friday] and the lads enjoyed it and had us buzzing around."

Wrexham's new manager will have a whole week with the squad ahead of Saturday's Conference Premier game at Woking.

Wilkin's first game in charge after succeeding Andy Morrell saw Wrexham held to a 1-1 draw by Salisbury City at the Racecourse.

Neil Ashton's penalty after Jay Harris had been fouled put Wrexham ahead but Clovis Kamdjo's header brought the visitors level on the stroke of half-time.

Keates was disappointed with the performance coming after Wrexham had beaten Hereford United 2-0 at home the previous Tuesday.

"The positive thing is the lads stuck in deep and battled and in the end we got a point," Keates said.

"We were at home and we expect to be winning, that's the disappointing thing.

"But we'll go back and we've got full training this week with the gaffer and he'll be able to stamp his own ideas onto things and we can push on from there."