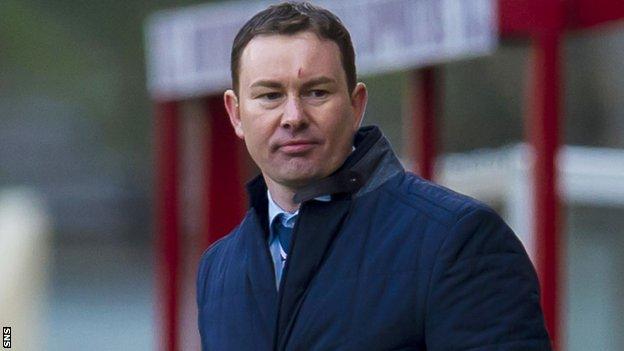 Derek Adams laid the blame for Ross County's 2-1 to defeat by Motherwell at the feet of Mark Brown.

The goalkeeper twice could not keep a hold of efforts, allowing James McFadden and John Sutton to follow up on the rebound.

A late volley from Yann Songo'o was not enough for the visitors.

And Adams said: "Motherwell are a good side and flying high, but it was two errors by our keeper that has given them their two goals."

Richie Brittain hit the post and Songo'o went close to a second goal as County launched a late onslaught, but they could not get the point Adams felt his side deserved.

"I thought we played well in the first half, had the best chance of the half and probably just shaded it," he said.

"Mark Brown has taken responsibility and when your keeper plays the ball back straight to the opposition there is not much the other defenders can do.

"Our goal came a little bit late for us although we had a couple of good chances after that from Jordan Slew and Yoann Arquin to grab an equaliser and give us a point we probably deserved over the 90 minutes.

"Although it didn't cost us with all the teams around us also losing, we are only interested in looking after ourselves to get out of the relegation play-off position."