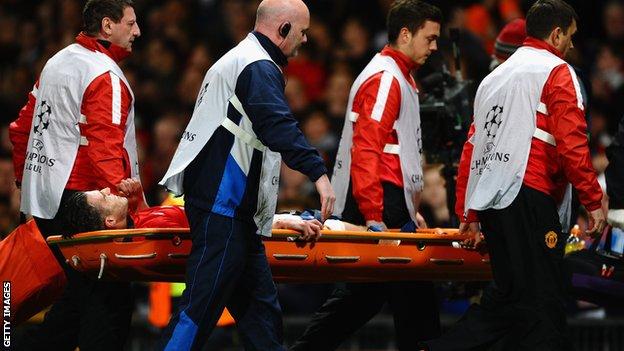 The Dutch international, 30, was taken off on a stretcher after scoring a hat-trick in Wednesday's 3-0 win against Champions League opponents Olympiakos.

"Everyone was saying David Moyes's next three games - Olympiakos, West Ham and Manchester City - might decide his future. Well, he'll have won two out of three if they win, which is the exact answer he wants to give his critics.

"With Sam Allardyce, West Ham have shown how to run a football club. If you're struggling, you back your manager. Fair play to the owners and they'll get their reward, which is staying in the division."

Manager David Moyes said an initial scan was "inconclusive" but a second look revealed the extent of the damage.

Van Persie has scored 17 goals in 25 appearances for United this season despite suffering a thigh problem against Shakhtar Donetsk which meant he missed the majority of December and January.

The former Arsenal player was absent as United exited both the FA Cup and Capital One up, losing four times in five matches.

Seventh-placed United face West Ham at Upton Park on Saturday and, reflecting on the victory against Olympiakos, Moyes said he felt he could "look in the face" of home supporters again after reaching the Champions League last eight.

Domestically the Red Devils are 12 points adrift of the top four - and Champions League qualification - after last weekend's 3-0 defeat by Liverpool at Old Trafford.

"We had given them something to shout about. There was nothing to be ashamed of about our performance," said the ex-Everton boss, who replaced the retired Sir Alex Ferguson last summer.

"In some of the games I have felt ashamed because we haven't played well enough and I have not got a team out that has got a good enough result."

The reigning Premier League champions have lost five of their 14 top-flight matches at Old Trafford under Moyes, winning six and drawing three.

But the 50-year-old Scot, who signed a six-year contract at Old Trafford, is confident United will produce winning performances given time.

"Our form and our performances have not been consistent enough," he said.

"We have shown some really top performances and some really low performances. We have to get better at that, but it is going to take time. We are not going to be able to do everything immediately.

"Because of the period we are in, that is happening a little bit; a very good one and maybe a bad one at times. My job over the coming years is to make sure we get rid of that."