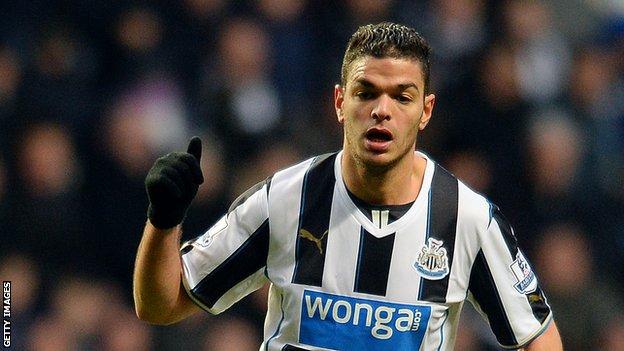 Hatem Ben Arfa's return can be the key to Newcastle United finishing the Premier League season strongly, according to manager Alan Pardew.

The 27-year-old French winger returns to first-team action against Crystal Palace this weekend after a month out.

Pardew, whose side are ninth, said: "It's all about Hatem with Hatem, and he looks in a much better place.

"If he brings the right ingredients, the work-rate, the ability to the pitch for us, then he can be influential."

Ben Arfa has been unavailable because of a groin injury, and Pardew said he had also missed a week's training "with an illness at home".

We have really great hopes for him, because he has great ability and a great work ethic

He has made 25 appearances in all competitions this season, scoring three goals - the last of which came in the 3-0 defeat of Crystal Palace at Selhurst Park in December.

Pardew, who will be serving the second of his three-game stadium ban for headbutting Hull's David Meyler, believes Ben Arfa is more likely to break down the Palace defence than teenage striker Adam Armstrong.

Armstrong, 17, a regular scorer for the reserves, made his senior debut as a substitute in last weekend's 1-0 defeat by Fulham at Craven Cottage.

But Pardew said he would now be taken out of the spotlight.

"Against Fulham, with the way they were set up and with no Hatem on the bench, we needed someone who could unlock the door," Pardew told BBC Newcastle.

"I'm going to take him away from it this weekend, because I don't want things to get over-hyped about this kid, because it's not fair on him.

"So he comes out of the firing line, but before the end of the season I hope the fans see a little bit more of him.

"We have really great hopes for him, because he has great ability and a great work ethic, so it was a little taster, but we have a senior player coming back who can open the door."