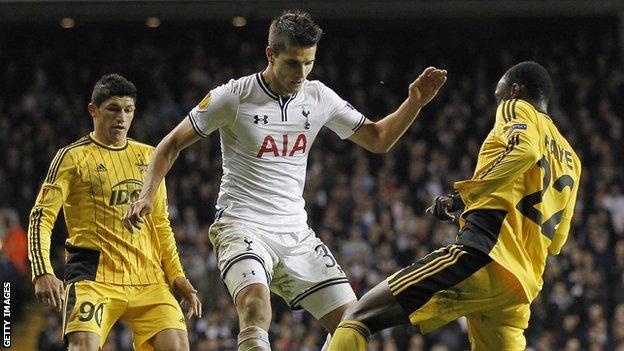 Former Tottenham greats Glenn Hoddle and Chris Waddle believe the club have failed to make full use of the £85m transfer fee received for Gareth Bale.

Spurs spent over £110m on new signings last summer but currently sit fifth in the Premier League, seven points away from a Champions League berth.

Hoddle told BBC London: "The signings at the beginning of the season have not really produced."

"At the minute I would have to say that Glenn is right," agreed Waddle.

Hoddle also revealed he came close to returning to the club until the end of the season after former manager Andre Villas-Boas was sacked in December, although the Portuguese was subsequently replaced by head coach Tim Sherwood.

"Tottenham has been my club since I was eight years old and I will do anything I can to help them," said the former England boss, who both played for and managed Spurs.

"I nearly went there this time around to the end of the season and I was prepared to do so."

Spurs sold Welshman Bale to Real Madrid for a world record fee and brought in a number of players in his stead last summer.

However, Erik Lamela has disappointed since his club record £30m move from Roma, while Roberto Soldado, who came for £26m from Valencia and Belgian Nacer Chadli, are among those who have looked short of what is required in the Premier League.

And Hoddle said the "deluge" of new signings saw the London club sign "good players, but not great ones".

Former boss Villas-Boas was sacked 16 games into the Premier League season after a 6-0 defeat at Manchester City and a home 5-0 defeat at the hands of Liverpool left them five points adrift of the Champions League places.

He was replaced by head coach Sherwood but the club's last chance of silverware went when they were knocked out of the Europa League by Portuguese side Benfica at the last-16 stage on Thursday, and they now have a fight on their hands just to finish in a Europa League spot for next season.

"There needs to be a better strategy to provide more stability," Hoddle said. "The issue is building a team with the right blend, the right style, and that hasn't happened yet."

Waddle, who was a Tottenham and England team-mate of Hoddle in the late eighties, said: "There is good quality but they're not producing it on a consistent basis. They need to get the balance right but in the final third there is no end product.

"There was a lot of talk about who bought the players, but it's a decent squad and they are probably in a realistic position."