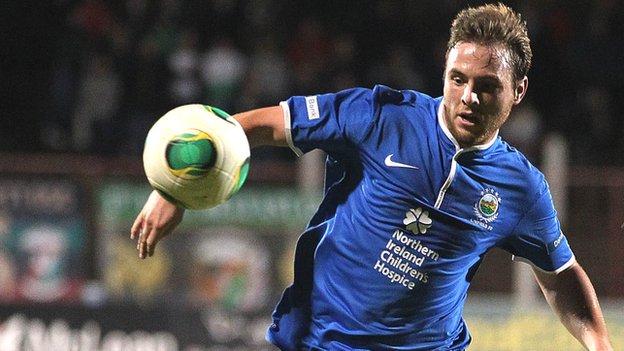 Defender Ward, skipper Gault and midfielder Mulgrew were being treated for slight knocks this week but should be available for the Showgrounds.

Winger Ivan Sproule had knee surgery on Thursday and is out for the rest of the season.

Leaders Linfield are two points ahead of champions Cliftonville.

There are six games left in the title race and the top two clash at Windsor Park on 29 March.

Manager Jeffrey expressed concern that most people would expect his table-topping team to see off ninth-placed Coleraine.

"It is never an easy place to get a win. It is a massive challenge," said the Blues boss.

"We will have to be at our best as we aim to try to conclude the third round of fixtures with a win, which would enable us to go into the five post-split games with our lead at the top of the table intact."

If Mulgrew plays he will make his 350th appearance in a Linfield shirt while his midfield partner Philip Lowry is in line to play his 200th game for the Windsor Park club.

Cliftonville face a trip to Glentoran as they aim to keep up the pressure on Linfield. Earlier this season Tommy Breslin's Reds were held to a 1-1 draw at the Oval.

Portadown and Crusaders are involved in a battle for third place in the Premiership table, with the Ports currently holding a one-point advantage.

Ronnie McFall's men are at home to Warrenpoint Town who will be buoyed by their win over Glenavon on Tuesday night.

"That was a crucial victory," said Town manager Barry Gray.

"We are eight points ahead of Ards now and it has given us a great chance of staying in the Premiership."

All three have recovered from injuries but defender David Magowan misses the Seaview game because of a one-match suspension.