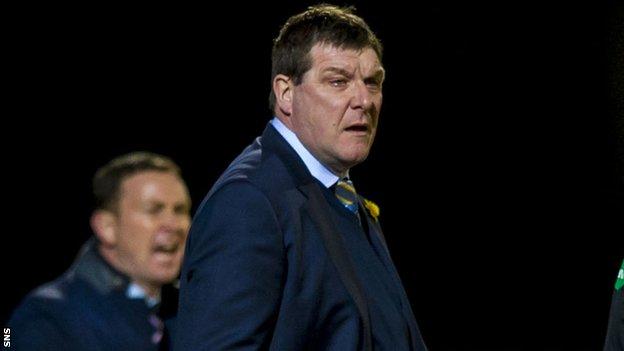 St Johnstone go into what they view as their most important game of the season without Tommy Wright after the boss's "successful" gall bladder surgery.

But assistant Callum Davidson, who will be in charge on Saturday, insists that Wright will still be picking the team.

Saints host Hibernian, who are chasing the Perth side in the battle for the final place in the top six.

"He will pick the team, but during the game, myself and Alec Cleland will deal with what's going on," said Davidson.

It's our biggest game of the season, but our preparations are as thorough as they normally are

Wright was detained in hospital on Monday after suffering from stomach pains and the Northern Irishman had what the club describe as successful "routine" keyhole surgery to remove "a troublesome gall bladder" on Thursday.

The 50-year-old is not expected to be released from hospital until early next week.

"I have been in regular contact with him and we have discussed it," said Davidson.

"Tommy said to me he will need to stay away on Saturday. But, knowing Tommy, come Saturday, he might change his mind."

St Johnstone lie sixth in the Scottish Premiership table, four points ahead of Hibs with a game in hand, and can all but secure a place in the top six if they defeat the Edinburgh visitors.

"I've never been caretaker manager before - it's maybe just as well I got that 15 minutes experience at Tannadice recently when Tommy got sent to the stand," Davidson told his club website.

"My iPad's red hot with emails from him! Seriously, there isn't much difference from other weeks.

"Tommy, Alec Cleland and I batter off the team during the week and invariably come to the same decisions most of the time.

"It's our biggest game of the season, but our preparations are as thorough as they normally are."

Hibs won on their last visit to McDiarmid Park, while the sides battled out a goal-less draw at Easter Road in December.

Central defender Frazer Wright could returns for the home side as he has recovered earlier than expected from an ankle injury.