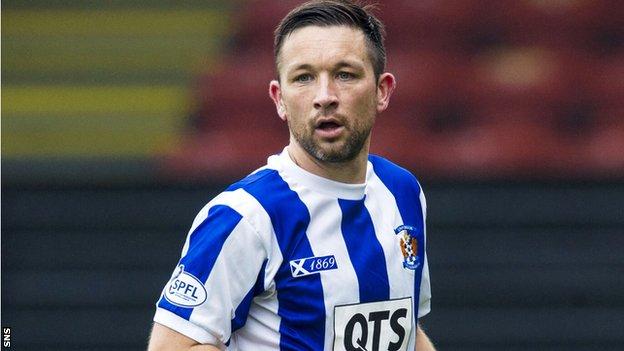 But Nicholson and Killie will aim to secure a victory and precious league points at Pittodrie on Saturday.

"We're in a scrap at the bottom of the table with this play-off, so we've got to be at our best," he said.

Nicholson, 35, was at Celtic Park supporting his former club last weekend and admitted it triggered memories of his efforts to win silverware.

"We had the chance when I was there," said Nicholson, who was at Pittodrie for a three-year spell from 2005.

"We got to a couple of semi-finals under Jimmy Calderwood and let ourselves down on the day really.

"But you saw with the supporters on Sunday at the final, the fan base is there. It was a great atmosphere and only a matter of time before the club was going to win a trophy.

"Derek McInnes and Tony Docherty have done a great job, they've signed really well, they've got experience and youth in the team and pace going forward. They're very exciting to watch."

And Nicholson is not surprised to see McInnes impressing in the dugout.

"I was at Rangers with Derek when he came from Morton and even back then you knew he was going to go on and be a top coach," he said. "He has a great knowledge of the game, always learning things and he was great with the young lads at Rangers.

"He obviously did well at St Johnstone and went down to Bristol and did well under tough circumstances. Then in the Aberdeen job he's done incredibly well and signed some really good players."

Kilmarnock team-mates are expected to mark Aberdeen's success with a guard of honour as they take to the field on Saturday.