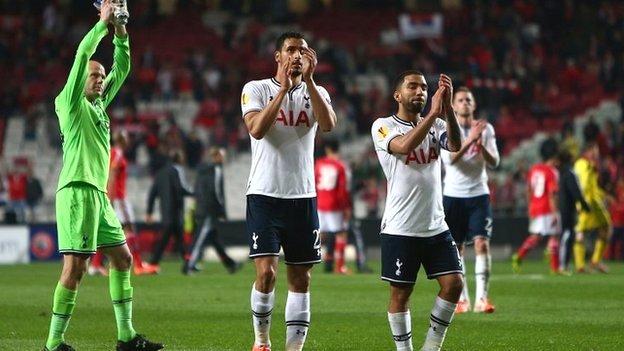 Tottenham manager Tim Sherwood says the manner of his team's display in their narrow Europa League loss to Benfica shows he has his players' support.

Despite losing 5-3 on aggregate, Spurs drew 2-2 in Lisbon and almost overturned a 3-1 first-leg deficit.

Sherwood accused his team of "lacking guts" after they were thumped 4-0 by Chelsea on 8 March.

"It's evident the players are on my side," he said. "My little rant has done them no harm."

He added: "They have showed character and guts and they need to do that until the end of the season and I'm confident they will do that."

Sherwood, who took over from former boss Andre Villas-Boas in December, has come under pressure after three consecutive defeats.

But after Sunday's home loss to Arsenal, the draw at the Estadio da Luz with an injury-hit team ended that unwanted losing run.

The tie looked over when Ezequiel Garay's first-half opener made it 4-1 on aggregate, but two Nacer Chadli goals in the space of a minute put Benfica on the verge of their first defeat in 23 games.

Chances for Gylfi Sigurdsson and Harry Kane, who also had a penalty appeal turned down late on, would have made the tie all-square, but Lima's injury-time spot-kick restored the home side's two-goal advantage.

Sherwood, who chose to sit in the stands after his first-leg clash with Benfica boss Jorge Jesus, said it was "good to see" his counterpart flustered.

He also believed Kane should have had a penalty after he was tripped by Miralem Sulejmani.

"We came here without a recognised centre-back, kept it nice and solid, conceded a soft goal, but bounced back," Sherwood said.

"I think we were very unfortunate not to score three goals.

"They were running scared. It was good to see their manager sweating as much as he did. I didn't see a suave character, he looked really flustered. It was worth the entrance fee to see that.

"The team who scores most deserves to go through, but the 3,000 Tottenham supporters must be proud of what they saw. They stuck behind us and travelled in numbers. Likewise, the boys put on a performance which they can be proud of."

Sherwood said he chose to sit in the stands because he "didn't want that to take away from what we did in the pitch".