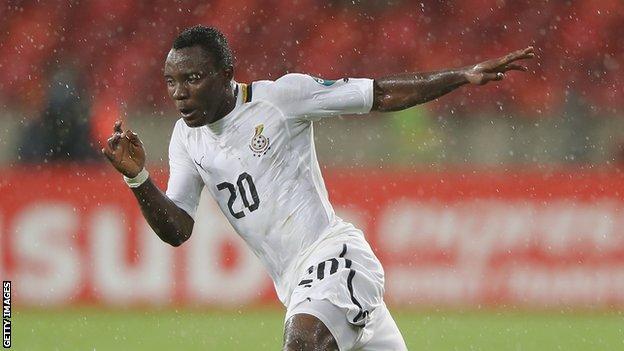 Since leading the team to the World Cup, Appiah has had to deal with rumours that the Ghana FA want to bring in a foreigner to assist him in Brazil.

"He's been the one that we've been with during the qualification so we, the players still believe in him," Asamoah told BBC World Service.

"If we don't believe in him it's going to be difficult for us and for him."

Asamoah added: "We have him right now so we have to do out maximum best to help him and support him."

"When we the players help the coach that is also when the coach will get confidence to do his job."

Asamoah made his debut for Ghana in 2006 and has since made 59 appearances. He has been named Ghana Player of the Year for the last two seasons

As for Asamoah's own position, things could be barely be going better ahead of this summer's tournament.

The 25 year-old has been one of the stand out players for runaway Serie A leaders Juventus this season and has just signed a one-year contract extension to keep him at the Italian club until 2018.

He puts his good form down to the fact that there hasn't been an Africa Cup of Nations tournament this year.

"Last year, when I came back from the African Cup, I'd lost a lot of energy, I wasn't the same player as I was at the start of the season," Appiah said.

"But this season has been great for me and this year I can say I've been consistently doing well in all the games.

"It's a great privilege playing with them. They have something within them that I learn from all the time. Andrea is amazing. He's one of the best in the world."

Asamoah started his career as a midfield playmaker but is now a left wing-back at Juventus and regularly plays in different positions for the Ghana national team.

Far from being frustrated by that situation, the Kumasi born player says it could help his career.

"The Juventus coach spoke to me once and wanted to try me on the left side and everything went well," he said.

"It's really good for me because I've got two positions I can play and that's really going to help me.

"In the national team I also play sometimes from the right side going forward. As a player, if you're versatile it can be really useful."