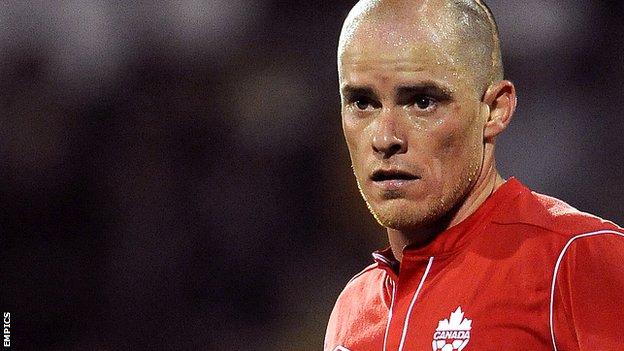 Fleetwood have signed striker Iain Hume on loan from Preston North End for the remainder of the season.

Hume is available to make his debut for the Cod Army, who are fourth in League Two, at Exeter on Saturday.

The 30-year-old Canada international has not featured at first-team level for Preston since 1 February.

We felt it would benefit him and us for him to get a month of football under his belt, and then probably come back in 28 days for our final push of the season

"He is a very experienced player who has scored goals all the way through his career," said Fleetwood manager Graham Alexander.

The former Scotland international, who played alongside Hume at Preston, told the club website: "He is a constant menace for the opposition defence to deal with and he is a team player. He is hungry for success and he is motivated."

Hume, who has scored twice in 20 club outings this term, spent much of last season on loan at Doncaster and had been expected to leave League One Preston last summer because of financial issues.

However, the former Tranmere and Leicester front man agreed a restructure of his contract that resulted in him staying at Deepdale.

Preston have a number of attacking options at their disposal, with Hume, Kevin Davies, Joe Garner, Stuart Beavon, Craig Davies and Paul Gallagher all competing for a starting spot up front.

But North End boss Simon Grayson says Hume - who can be recalled after 28 days of his spell at Highbury - could still have a role to play at the club this season.

"If Iain is away for 28 days and we end up in the play-offs, he will have had six or seven games at Fleetwood," Grayson told BBC Radio Lancashire.

"He will be fully match-fit and be ready to come in and do his bit in the play-offs if that's to be the case."