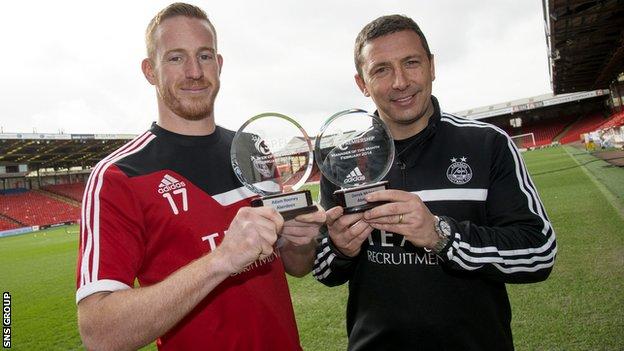 Fresh from their League Cup success, Aberdeen are celebrating a double in the SPFL's February awards.

Derek McInnes is the Premiership manager of the month, while striker Adam Rooney has collected the top player honours.

Rooney, signed from Oldham in January, scored in all three of the Dons' league matches last month.

Aberdeen won four of their five games in all competitions in February, including two victories over Celtic.

McInnes's side won 2-1 at Celtic Park to set up a Scottish Cup semi-final with St Johnstone and repeated the scoreline at Pittodrie to end the Premiership leader's unbeaten league run.

Any award is recognition of how well the team's doing

"Any award is recognition of how well the team's doing," said the Dons boss. "Obviously I'm picking it up but it's a case of everybody working extremely hard behind the scenes.

"There's a lot coming our way at the minute. February was a good month for us, as the award suggests, and hopefully we can have a good March.

"We've made a lot of people happy which is what we want to do. There's a lot of job satisfaction for ourselves, the staff and as a group of players.

"Sunday was a brilliant day for the club, for the city and it's important we try to build on that now."

Rooney, who converted the decisive spot-kick in Sunday's penalty shoot-out against Inverness, has netted six goals in nine appearances for the Dons.

"It's been brilliant and one of the best weeks of my career," he said. "These are the things you dream of growing up, to win a cup final.

"The city has been buzzing. Hopefully it's only the beginning and we have to use this now to kick on and focus on the league.

"The gaffer is on at us all the time about just taking each game as it comes."