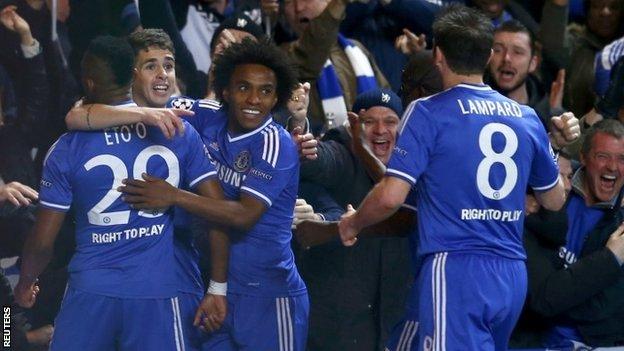 Manchester United and Chelsea could face each other when the draw for the Champions League quarter-finals is made on Friday at 11:00 GMT.

United overturned a 2-0 deficit against Olympiakos to book their spot, while Chelsea overcame Galatasaray.

The Europa League quarter-final draw will be made on Friday at 12:00 GMT.

The first legs of the Champions League ties are set to be played on 1-2 April, with the second legs on 8-9 April.

United defender Phil Jones said: "We're just happy to be in the next round. We left ourselves with a difficult task after the first leg but we came through the test with flying colours and we are excited about the next round."

German side Dortmund complete the line-up. They have had a mixed domestic season so far, but coach Jurgen Klopp's men have the experience of reaching last season's final.

This year's final is to be held at Benfica's Estadio da Luz in Lisbon on 24 May.

And former Portugal international Nuno Gomes is hoping Chelsea and Real Madrid can be kept apart in Friday's draw because he wants them to meet in the "perfect final". Both Chelsea boss Jose Mourinho and Madrid forward Ronaldo are Portuguese.

Gomes said: "I wish both Jose Mourinho and Cristiano Ronaldo can play against each other [at the final] and maybe it would be the perfect final in Portugal.

"We Portuguese, we want the other Portuguese that are abroad to succeed, so for us it would be very good to have Jose and Cristiano in the final."

The Europa League quarter-final ties will be held on 3 and 10 April.

Tottenham lost 5-3 on aggregate to Benfica on Thursday, meaning there is no English representation in Europe's second cup competition.

The Portuguese side will be joined in the Europa League draw by AZ Alkmaar, Basel, Lyon, Juventus, Porto, Sevilla and Valencia.