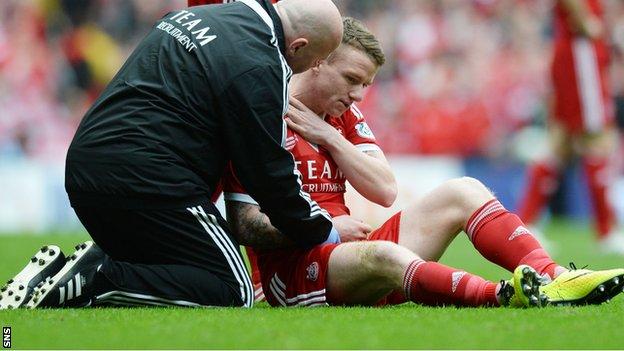 Aberdeen expect to be without Jonny Hayes for around six weeks because of the collarbone injury he picked up early in Sunday's League Cup final.

"We're hopeful it might be a bit sooner, but we've got to be on the safe side at the minute."

Winger Hayes picked up the injury in the opening seconds of the victory over Inverness Caley Thistle at Celtic Park.

He failed to recover from the challenge with Caley Thistle defender Josh Meekings and it means that the Irishman faces a battle to play again this season.

It also means that Aberdeen, who sit second in the Premiership and are in the Scottish Cup semi-finals, are minus two key midfielders.

Peter Pawlett was ruled out of the Cup final on Saturday morning and will also miss this weekend's visit by Kilmarnock.

"He'll not be fit for Saturday, but we're hoping it will not be too long," said McInnes.

"The middle to the back end of last week, he was fit and in our plans to play, but he struck a shot on Friday and he caught it a little awkwardly and it annoyed the area where he was getting the problem.

"I do feel we are a better team with Peter in it and, with Jonny coming off after about eight seconds, we have lost two players who bring a lot of pace and a different dynamic to us and they are players who have had a fantastic season."