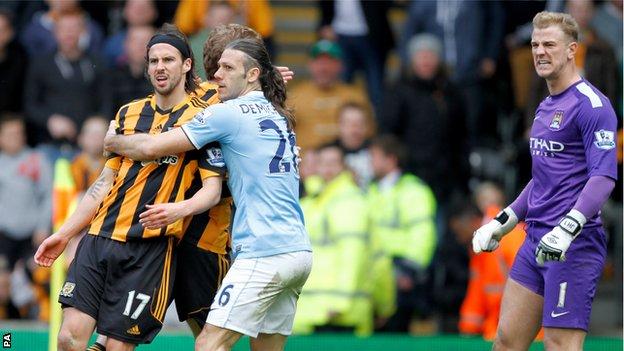 Hull forward George Boyd will serve a three-match suspension after the Football Association rejected his appeal against a charge of spitting at Manchester City's Joe Hart.

The incident occurred during last Saturday's Premier League match at the KC Stadium, which the visitors won 2-0.

Boyd's actions, not seen by referee Lee Mason or his fellow officials, was caught on video.

The 28-year-old denied misconduct but his appeal was rejected.

Hart was booked for confronting Boyd after the winger went down under his challenge on the edge of the penalty area.

The England number one, believing his opponent had dived, responded furiously and pushed his head against Boyd as the two exchanged insults.

After the game, Boyd insisted Hart had been very lucky to stay on the pitch, claiming: "He didn't nut me but he's put his head in, so he should have got sent off really."

Hart faces no further disciplinary action from the FA.

Hull manager Steve Bruce had launched an impassioned defence of his player, saying: "George Boyd would not do that, not a chance, not deliberately anyway. He is as honest as they come."