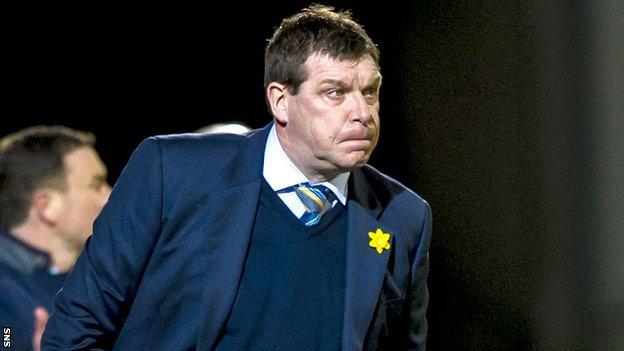 St Johnstone have announced that manager Tommy Wright will have "a routine operation" after suffering stomach pains.

The Scottish Premiership side stated on their website that the 50-year-old was taken to hospital on Monday and was "detained overnight for observation".

"The cause of the problem has now been established and he will undergo a routine operation tomorrow," they said.

St Johnstone host Hibernian in the Scottish Premiership on Saturday.

The club say that coaches Callum Davidson and Alex Cleland will prepare the team for a fixture that could decide which of the two sides secures a place in the top six this season.

As the split for the final round of fixtures approaches, Saints lie sixth, four points ahead of Hibs, who have played one more game.

Wright, who had been assistant at McDiarmid Park, took over as manager after Steve Lomas left to manage Millwall in June.