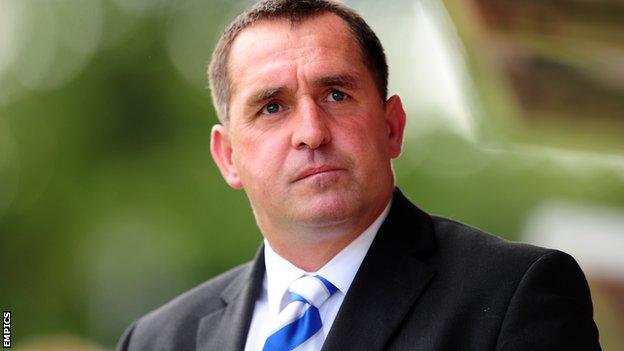 Conference Premier club Barnet have appointed Martin Allen as head coach until the end of the 2014-15 season.

It will be his fourth spell in charge of the Bees, having started his managerial career with the club in March 2003.

He left a year later but returned to Underhill for brief spells in the dugout in 2011 and 2012.

The 48-year-old has been out of work since being sacked by League One side Gillingham in October.

Dutch duo Ulrich Landvreugd and Dick Schreuder were in charge of first-team affairs at The Hive following the resignation of previous head coach Edgar Davids in mid-January.

The north London side are currently one point off the play-off places.

"I'm really looking forward to the challenge of helping Barnet return to the Football League," Allen told the club website.

"I have some fantastic memories of Barnet and when I've returned to the club I've always got a good reception."

Allen's first spell in charge at Barnet, then in non-league, ended in March 2004 when he left the club to join Brentford. After subsequent spells with MK Dons, Leicester and Cheltenham he re-joined the Bees in March 2011.

Barnet were battling to stay in League Two and Allen won two of three games in charge but the former QPR and West Ham midfielder took up the vacant post at Notts County in April.

He was sacked by the Magpies in February 2012 and then returned to Barnet for a third spell in charge in early April, replacing Lawrie Sanchez.

Once again the then-Underhill outfit were in a relegation battle and Allen guided them to safety with two victories in three games.

In summer 2012 Allen was appointed Gillingham manager and he led the Kent club to the League Two title but was sacked earlier this season after winning just two of their opening 11 league games in the third tier.

"It is nice to have the opportunity," he said. "I spoke to the chairman [Tony Kleanthous] but we have always had a very good relationship and we have always kept in touch.

"When Gillingham were promoted he was one of the first people to call and congratulate me and likewise when Barnet were relegated I was the first on the phone to him.

"It will be great to work with him again at The Hive."