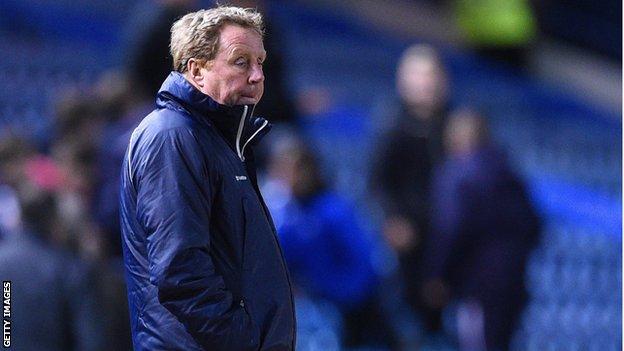 Rangers are 10 points outside the automatic promotion places after Tuesday's 3-0 defeat at Sheffield Wednesday.

Fernandes had previously declared on Twitter that there was "nothing wrong with Harry".

"I stand by my players, full stop, and my manager," he tweeted on Wednesday.

"A leader stands behind his troops. Now is the time we should rally round Harry and the players."

QPR in the Championship

Redknapp took charge at Loftus Road in November 2012, when the club were bottom of the Premier League, and was unable to prevent relegation last May - but they won eight of their opening 10 Championship games this season.

Their form dipped towards the end of 2013 as they won four of their next 13 league matches, before they started 2014 with four successive wins.

However, despite adding five players to the squad on transfer deadline day in January, Rangers have managed two victories since the start of February.

Top scorer Charlie Austin has been sidelined with a shoulder injury since 31 January, while winger Matty Phillips, full-back Danny Simpson and midfielder Ale Faurlin have all suffered long-term injuries this season.

"The person who should be most depressed is me. But I am not. We are building and building. And we make mistakes and we learn," Fernandes added.

"No one wants to lose. Last season was a disaster. Full stop. We have stopped the rot. Every year we will rebuild."

Earlier this month, Rangers announced a loss of more than £65m in their accounts for the year to May 2013.

Championship clubs losing more than £8m in 2013-14 will be subject to sanctions under Financial Fair Play (FFP) rules.

Any team remaining in the second tier that falls foul of the rules will be subject to a transfer embargo until they can prove their financial results are in line with the regulations, while a team promoted to the top flight will be subject to a fine, which is operated on a sliding scale.