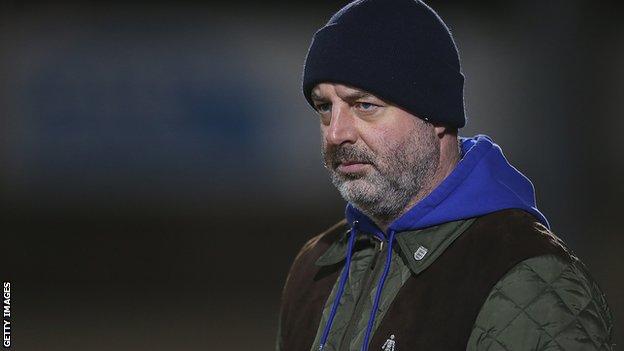 Rochdale manager Keith Hill says he is not yet thinking of promotion, despite returning to the top of League Two on Tuesday with a 3-0 win at Northampton.

Dale are a point ahead of Chesterfield and six above fourth-placed Fleetwood.

"The league table doesn't lie, but having said that, it's not really a concern," the 44-year-old told BBC Radio Manchester.

"If we're in the same position with three games to go, then we can start dreaming," the ex-Barnsley boss added.

"It's been a very good season so far and we've got nine games left. It's about trying to make the most of every opportunity."

Victory at Sixfields was tempered when midfielder Matty Lund was sent off after collecting a second yellow card for celebrating with the crowd after scoring his side's second goal.

"It is barmy but apparently the referee has got nowhere to turn," added Hill.

"He doesn't enter the crowd - the crowd pull him to them. He wanted to celebrate with his mum and dad, who were sat in that stand behind the goal.

"It just seems a bit of a shame. It's a bit pedantic. I just wish referees would stand up for common sense because he doesn't deserve to be sent off."