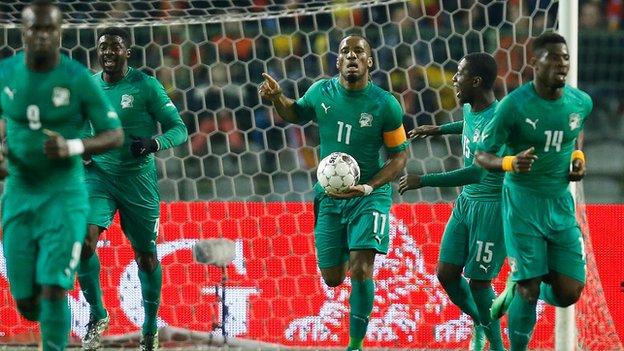 As football fans across Africa are hoping that one of their World Cup representatives can reach the semi-finals or even win the tournament in Brazil this year, Liverpool legend John Barnes believes that the mental aspect of the game is holding the continent back.

Barnes played at the 1986 and 1990 World Cups for England, won two league titles with Liverpool in 1988 and 1990 and went on to coach Jamaica's national team.

Now working as an analyst for African TV broadcaster SuperSport, he spends a lot of time in South Africa.

And Barnes thinks he knows why Pele's 1997 prediction that an African nation would win the World Cup before 2000 did not come true.

"What Pele saw was the physical attributes that African players have, but what he probably didn't take into consideration is the mentality necessary to win the World Cup," Barnes told BBC Sport on a visit to Zimbabwe.

Ground to make up

"It's not just about physical ability, it's about your mentality. I suppose that's where African and other developing football countries such as Jamaica have to improve.

"Ivory Coast striker Didier Drogba has shown that African players can compete with anyone. The mentality is important, the discipline and the desire and the determination and the respect.

"What I'd like the African players and those from a lot of the other developing football countries to do is to play for their countries with the same desire, respect and humility that they have when they play for their European clubs."

Some of Africa's greatest players such as Togo's Emmanuel Adebayor and Samuel Eto'o of Cameroon have had well-documented fall-outs with their national federations.

Areas of contention have included players not being paid on time, poor travel arrangements, inadequate preparations, lack of communication and other administrative issues.

And while this has surely affected the performance of their national teams, Barnes does not blame the players.

"It's understandable considering the way that the players are treated by the administrators. They're treated much better in Europe, and players have to be made to feel wanted," he said.

"Because of the challenges that the African and other developing football countries have, things aren't going to be perfect. When Drogba plays for Galatasaray he gets first-class treatment, but when he plays for Ivory Coast maybe he doesn't, because maybe the organisation isn't great.

"So I'm not blaming the players, but if you ask what the solutions are, that is one - to improve the organisation. Maybe we're disappointed that an African country hasn't won the World Cup, but to me what the players have achieved is ok, their achievements are acceptable.

"Maybe you could say they could have a better attitude but we're human beings and it's understandable that it affects you."

It seems there is a lot to be done before an African team betters than the quarter-final achievements of Cameroon in 1990, Senegal in 2002 and Ghana in 2010.

Barnes is convinced that a South American team will be world champions this year on their own continent, but of the African teams he believes that under-achievers Ivory Coast will go the furthest.

"Like Pele, I look at the physical quality that players have and I'm hoping that they can adopt the correct mental attitude to be successful, and that is why I always have hope for Ivory Coast because physically and technically they are equal to any country in the world," said Barnes.

"I always hold out hope for their mentality to rise and their discipline to get better.

"I can't see anyone getting past the South American teams, but I believe that out of all the African teams Ivory Coast will do the best."