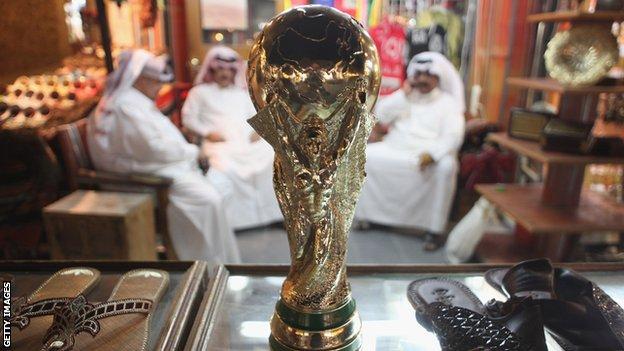 Once again Fifa's handling of the selection process for the 2018 and 2022 World Cups is under scrutiny.

Although the payments are said to relate to legal and other expenses over a six-year period from 2005, the Telegraph says a company called Jamad, owned by Warner, invoiced Bin Hammam's company, Kemco, for £750,000 just two weeks after Qatar were surprisingly awarded the finals in December 2010.

While that will arouse fresh suspicions, it's not clear the payments are in any way linked to the World Cup vote. In fact some believe Warner, the former head of the North American and Caribbean Football Confederation (Concacaf), didn't even vote for Qatar.

Although the head of the Dominican FA, Patrick John, claimed in July 2011 that Warner didn't follow through with his pledge to back fellow Concacaf country America, others say Warner repeatedly told 2022 candidates that he was committed to voting for the United States.

A look at the voting numbers would appear to back that up. In the final round, Qatar beat USA by 14 votes to eight. It is hard to see how America could have got to that number without the support of Warner and the two other Concacaf representatives on the Fifa executive committee - namely American Chuck Blazer and Rafael Salguero of Guatemala.

Sadly, the truth is that we will never know for sure. The ballot for the World Cup is held in secret, a fiercely-guarded tradition that is unlikely to change even after all the controversy of the last three years.

And given that lamentable lack of transparency, it's hardly beyond the realms of imagination to suppose that Warner might have promised one thing to one bid and then done quite the opposite.

But if Warner didn't vote for Qatar, what was all that money from Bin Hammam for?

But if Warner didn't vote for Qatar, what was all that money from Bin Hammam for?

The easiest conclusion to draw is that it was in some way linked to Bin Hammam's doomed bid to unseat Fifa President Sepp Blatter during that now infamous election in Zurich in May 2011.

Bin Hammam never contested that election as he had already pulled out amid corruption allegations. He was eventually banned from football for life for offering bribes to Caribbean football officials at a meeting in Trinidad.

Warner helped set up that meeting and was subsequently forced to resign after 28 years at the top of world football, having been described as an accomplice to corruption.

Is it possible that Bin Hammam was already paying Warner for his support in the upcoming Presidential election?

Or maybe the two men had separate and perfectly legitimate business dealings, none of which were connected with Fifa or football. Remember these two men had been close allies for well over a decade. Both have wide business interests outside the game.

Warner has told the Press Association that the Telegraph's story was part of a "witch hunt" against Qatar. The Qatari's supreme committee for the 2022 World Cup, meanwhile, have distanced themselves from the latest claims to dog their hosting of the tournament, saying they adhered to Fifa's strict bidding regulations. Bin Hammam could not be reached for comment.

Nevertheless the Telegraph's excellent investigation has yet again raised serious questions about the conduct of senior Fifa officials. And while the governing body may claim that they are now cleaning up their act, Simon Johnson, the former chief operating officer of England's failed 2018 World Cup bid, is right when he says that the world governing body's ethics committee should now investigate the newspaper's claims.

It only adds to the pressure on Fifa and their chief investigator Michael Garcia to come up with a new system for choosing the host for football's biggest and most prestigious prize.