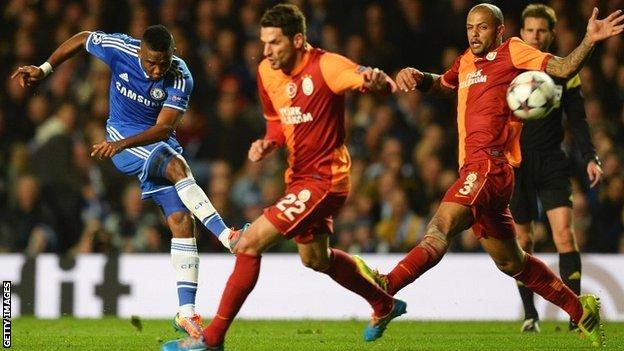 Chelsea boss Jose Mourinho said his team returned to their rightful place in Europe after reaching the Champions League quarter-finals.

The Blues beat Galatasaray 2-0 at Stamford Bridge to win the tie 3-1.

Since Mourinho's return to Chelsea in the summer of 2013, the Blues have lost twice in eight Champions League outings, keeping five clean sheets

But they became the first side to crash out at the group stage last season, having won the title the previous term.

"We are a Champions League club and now we are among the best eight, the best clubs in the world," said Mourinho. "The players deserve to be there."

After dropping out of last season's Champions League, Chelsea went on to win the Europa League and are now on course to win their third consecutive European trophy.

They could be the only English team to remain in the competition after first-half goals from Samuel Eto'o and Gary Cahill helped them cruise past a lacklustre Galatasaray side.

Manchester City and Arsenal have already been knocked out, while Manchester United trail by two goals ahead of Wednesday's last-16 tie against Olympiakos.

Prior to the last-16 draw, Mourinho expressed a desire to play Galatasaray so he could come up against former Blues striker Didier Drogba, but he has no preferences for Friday's quarter-final draw.

Chelsea could face Barcelona, Real Madrid, Pep Guardiola's Bayern Munich and Atletico Madrid, while Mourinho has not yet ruled Manchester United out of contention.

Mourinho said: "All the big candidates to win the competition. Welcome to any one of them. We wait for the draw. It doesn't matter who."

The Portuguese boss, who is seeking a third Champions League with a different club having won the title with Porto and Inter Milan, said prior to the game at Stamford Bridge that Drogba was still world class.

Mean at the Bridge

Since drawing 4-4 with Liverpool in 2009, Chelsea have conceded only five goals in eight Champions League knockout games at home

But the 36-year-old struggled on his return to west London as Eto'o eclipsed the Ivorian.

Mourinho blamed Drogba's low-key display on the rest of the team.

"I think the most difficult thing him was the way his team played," said the Blues boss.

"If you are a striker and the team is not there playing behind you, then you are a lonely man. It has happened to every striker in the world and tonight it happened to Didier."