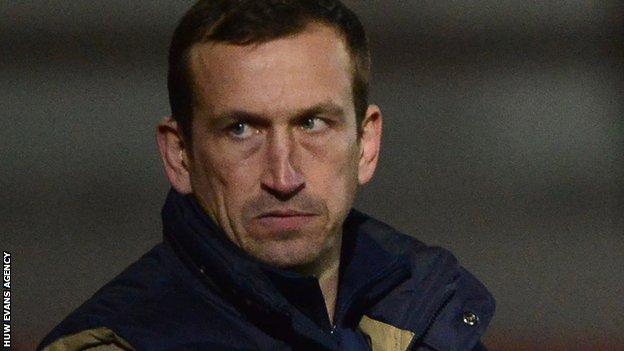 The Exiles have slipped down to 14th place in League Two, seven points behind Southend who occupy the last play-off place in seventh.

Newport play one of their two games in hand on the Shrimpers on Wednesday at home to 13th place Dagenham, and Edinburgh says his focus is on that.

"I'm fed up of talking about the play-offs," said Edinburgh.

"I think everyone's expectation has gone through the roof in terms of the start we had.

"I think all we can concentrate on is ourselves, not what's below us not what's above us.

"[Wednesday's] game is the most important one and we go from there."

County have only won once in their last 14 games and will be seeking for their first win at Rodney Parade in six home games.

Edinburgh says the only reason County are within reach of the play-offs is because teams in and around them have also been on poor runs.

"It's not only us who are having a bit of indifferent form at the present time," said Edinburgh.

"If it wasn't the case then I'm sure that we wouldn't be only seven points off the play-offs.

"We've slightly forgotten how to win a game and we've just got to try and rediscover that form.

"For me as a manager as long as the attitude and application's right, I'm confident the wins are not too far away."

Newport will be without injured defenders Ismail Yakubu and Andy Sandell on Wednesday.

Tom Naylor returns from suspension to bolster Edinburgh's defensive options and he also hopes to have Byron Anthony back.

"The injuries are a big blow but we'll get Tom Naylor back," said Edinburgh.

"Byron Anthony trained again this morning so hopefully Byron will have no reoccurrence of the illness he's had over the last few days.