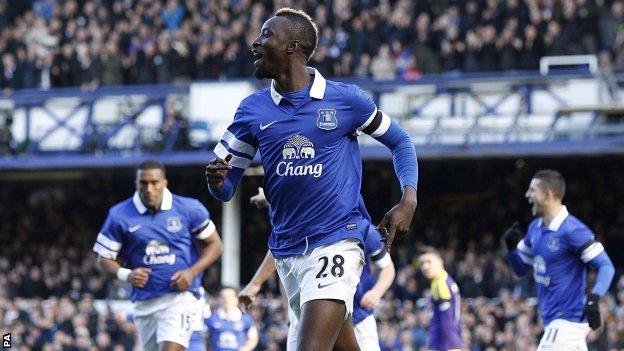 He has made only one appearance for the Toffees since his January loan move from Monaco, scoring in a 3-1 FA Cup win over Swansea.

Head and shoulders above the rest

Lacina Traore will become the tallest outfield player in Premier League history at 6ft 8in if he makes a league appearance for Everton. He is the same height as Manchester City goalkeeper Costel Pantilimon.

"He is progressing really well and the signs are very good that we will see Lacina in an Everton shirt this season," manager Roberto Martinez said.

"He has had the first part of the treatment and his recovery is quicker than we expected, so we are very pleased.

"His attitude has been very much focused on coming back and playing before the season ends, which we are very much looking forward to," Martinez told the club website.

Traore, who could play in this summer's World Cup, has not made an appearance yet for his parent club. He joined Monaco from Anzhi Makhachkala for an undisclosed fee three weeks before being loaned out to the Toffees.

The 6ft 8in forward, who was a West Ham target, passed a medical with the Merseyside club despite already having a hamstring problem.