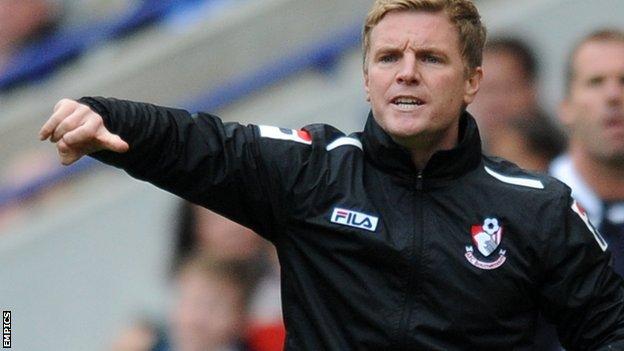 Howe has led the club to promotion twice in two separate spells.

Bournemouth are comfortably placed mid-table in their first season back in the Championship after a 23-year absence from the second tier.

"I do believe he could be a future England manger," Fletcher told BBC Radio Solent.

Yes, he has only been in football as a manager for four or five year but it's fantastic to see how much he has come on.

"I speak to people all the time through the football world who tell me about their mangers, and for me Eddie is head and shoulders above anyone.

"I believe in him, I don't think there are many better managers around. He is so good at what he does."

Fletcher, who became the first recipient of the Sir Tom Finney Award at the Football League Awards on Sunday, remains with the Cherries in a scouting and ambassadorial role.

He retired last season as the club's record appearance holder after 18 seasons at Dean Court, and has watched Howe mature as a boss since he first took over in 2009, becoming the youngest Football League manager at the age of 31.

In between leading Bournemouth to League One and winning promotion to the Championship for the first time since 1987, Howe also had a spell at Burnley.

"Yes, he has only been in football as a manager for four or five years but it's fantastic to see how much he has come on," said Fletcher.

"And I've had some fantastic managers in my time - Tony Pulis, Mel Machin and Sean O'Driscoll."