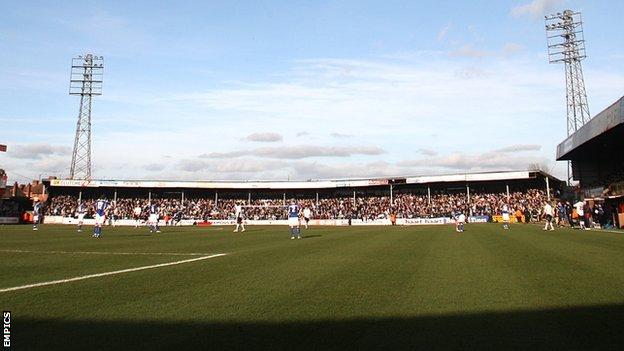 Hereford United are facing another serious financial crisis which could force the club into administration.

Monday's annual general meeting heard that the Bulls made losses of £499,000 for the year ending April 2013.

And club chairman David Keyte revealed that they now need £300,000 to see out the current Conference Premier season.

Keyte said that they are considering administration, while their auditors have warned of 'significant doubt' as to whether the club can carry on.

"It really is no exaggeration to say that Hereford United are facing potential financial meltdown in the next week or so unless they can get new investors in.

"However you look at the figures, they make grim reading for United supporters.

"The board is pointing to the loss of the Football League funding. When a team are relegated into the Conference, they lose their share of television revenue.

"United's income stream from that source dropped from around £717,000 in League Two to £280,000, which included a one-season parachute payment.

"This season, United do not have that parachute payment and their income from the Conference is around £47,000, as opposed to the £717,000 they received in League Two."

"Administration is the last resort, "Keyte told BBC Hereford & Worcester. "We're still doing everything we can."

The deadline for going into administration this season is a week on Thursday and, should Hereford take that step immediately, they would be deducted 10 points.

Given that they are currently only five points above the relegation zone, that would mean a likely drop into the Conference North or South.

If they opt to enter administration after that deadline, they would then start next season on -10 points, most likely having switched to operating with a part-time playing staff.

However, on a night when it was announced that Nick Nenaditch has stood down as a director, Keyte did also reveal that there are still a couple of possible potential investors showing interest.

Hereford's financial fortunes have been on a downward spiral since being relegated from the Football League in May 2012.

Going into administration was first considered last season and it was only just two months ago when they averted a winding-up threat brought by Revenue and Customs (HMRC) over the non-payment of a £36,800 PAYE tax bill.

Since then, the club have signed new leases with Herefordshire Council to remain at Edgar Street, their home for the last 90 years, which opens the door for future development plans at both ends of the ground.

But, following the collapse of a potentially lucrative deal with a telecommunications company, short-term cash flow problems still exist.

They have continued to cut costs, having had to reluctantly make four backroom staff redundant, on top of the enforced January deadline day sale of star player Josh O'Keefe to Kidderminster Harriers.

Hereford still owe other clubs in respect of loan players borrowed earlier in the season and they still have a remaining HMRC debt of almost £25,000 for the December-February period.

And having warned they needed home gates of more than 2,000 for the rest of the season just to break even, there has been an insufficient response at the turnstiles.

Their average attendance this season is only 1,658 - half the size of the crowds they were attracting in League One five years ago - and two of the last three gates (1,013 against Macclesfield and 1,378 against relegated Hyde), were well below this season's average.