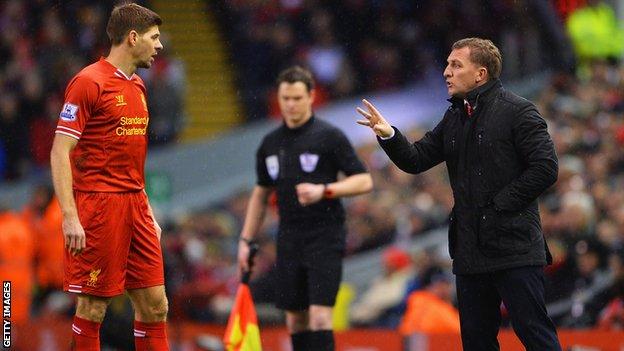 Liverpool captain Steven Gerrard says boss Brendan Rodgers is the best man-manager he has worked with.

Northern Irishman Rodgers joined the club in 2012 and is the sixth manager of Gerrard's 16-year Liverpool career.

"He has been a revelation," said the 33-year-old. "He keeps tinkering and tweaking formations, making little changes to personnel and pulls it off.

"You go out feeling full of confidence and belief. His one-on-one management is the best I've known."

When Brendan Rodgers was appointed Liverpool manager - and throughout a mixed first season - some questioned whether he was more style than substance.

If Liverpool's results this season have given the lie to that suspicion, then the ringing endorsement from captain Steven Gerrard is the final proof of the quality of Rodgers as a coach and manager.

Gerrard's word carries more weight than any other at Anfield and among Liverpool's supporters. You can guarantee his demand that Rodgers now be given a lengthy new contract will have already been heard loud and clear by owner John W. Henry in Boston.

The England captain has also called on Liverpool's owners to reward Rodgers, whose contract expires at the end of next season, with a new long-term deal.

"He is a young coach who has earned the right to become Liverpool manager and from week to week he is improving," Gerrard added of the 41-year-old.

"We are absolutely delighted he is here and I just hope there is a lot of movement as we speak because they have got to get him signed up as soon as possible."

Liverpool are second in the Premier League, four points behind leaders Chelsea with a game in hand and nine matches to play.

Gerrard has never won the Premier League title during his time with Liverpool, finishing as a runner-up in 2001-02 when Gerard Houllier was manager, and again in 2008-09 under Rafael Benitez.

The last time Liverpool won the league was in 1989-90 when Kenny Dalglish secured the club's 11th championship in 18 years.

Gerrard's greatest success with Liverpool came in 2005, under Benitez, when he captained the club to Champions League victory over AC Milan.

The midfielder also played under the now England manager Roy Hodgson between June 2010 and January 2011.

Hodgson is one of seven coaches to have worked with Gerrard at international level, along with Fabio Capello, Steve McClaren, Sven-Goran Eriksson, Kevin Keegan and caretaker managers Stuart Pearce and Peter Taylor.