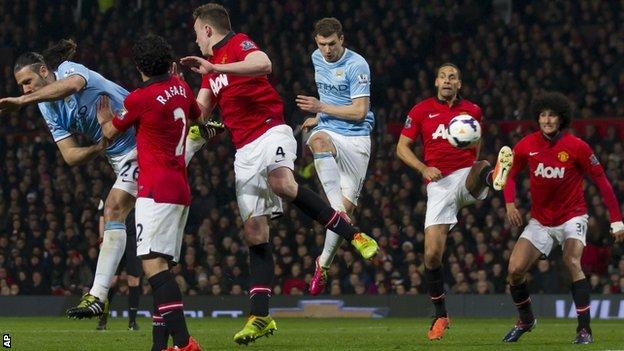 Edin Dzeko scored early in each half - the first inside a minute - and Yaya Toure added a third in stoppage time as City moved into second place and within three points of Chelsea with two games in hand.

It was another sobering and thoroughly miserable night for United manager David Moyes as, for the second home league game in succession, the current gap in quality and strength between the reigning champions and their rivals was emphasised as City followed Liverpool by winning 3-0 and with plenty to spare.

City's hugely impressive display cut short Moyes's hopes of sparking a late run in this disappointing season and now they face a fight to even finish in the top six and claim a place in the Europa League.

Manuel Pellegrini's side have no such problems as they cruised to victory to complete an emphatic double over their arch-rivals after a 4-1 win at Etihad Stadium earlier this season and now move towards this weekend's game at Arsenal in ominously confident mood.

City started at blistering speed and were ahead inside a minute. In a blur of action Rafael's fine tackle stopped David Silva and when Samir Nasri's shot came back off the post Dzeko was perfectly placed to score.

United were torn apart by City's movement and creation and it took a fine diving save from goalkeeper David De Gea to stop Dzeko adding a second in front of the Stretford End.

As the half progressed City did not maintain their early pace and United, while clearly inferior, were able to at last find a foothold in the game but wasted two good opportunities when Marouane Fellaini shot tamely at Joe Hart and Juan Mata sidefooted over the top from a good position.

"Put simply, United were a mess against City. They looked and played like a team in disarray, led by a manager struggling horribly to get to grips with his task."

The giant Belgian was involved in a contentious moment when, while in possession himself, he senselessly elbowed Pablo Zabaleta and somehow escaped with only a yellow card from referee Michael Oliver.

United made a change at half-time when Tom Cleverley, who not surprisingly struggled in an unfamiliar role on the right flank, made way for Shinji Kagawa - but again City were faster out of the blocks and increased their lead after 56 minutes.

Dzeko was the scorer once more, showing great composure and technique to send a sidefoot volley high past De Gea at his near post - the signal for City's elated fans to start doing the "Poznan" celebration.

It had been another unhappy night for £27.5m summer signing Fellaini and it was no surprise when he was substituted and replaced by Antonio Valencia after 66 minutes, a move that was well received by United's fans.

City keeper Hart had rarely been tested but he showed good reactions to block a flick from Danny Welbeck as United searched for a way back into a contest where they had been outplayed for long periods.

United had never looked like claiming anything from this game and the scoreline was given a more realistic appearance in stoppage time when Toure scored his 21st goal of the season with a low finish.