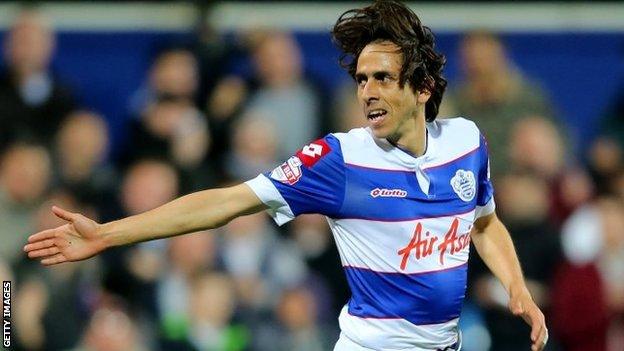 Yossi Benayoun scored the winner before being sent-off as QPR beat play-off rivals Wigan to go third in the Championship table.

Former Liverpool midfielder Benayoun hit the only goal when he raced on to a flick from Clint Hill and lashed into the far corner.

Wigan were on top for large spells, with Ivan Ramis hitting the crossbar.

Ravel Morrison hit the bar for QPR, before Benayoun was dismissed in stoppage-time for a second booking.

Wigan had not lost in 10 games and started the day a place behind Rangers.

It was Uwe Rosler's visitors who had the first chance when midfielder Josh McEachran hit a free-kick just wide.

QPR then went ahead when Benayoun collected Hill's flick and smashed past Ali Al-Habsi in the Wigan goal.

Harry Redknapp's side were then indebted to former England goalkeeper Rob Green, who saved well from James Perch and Nick Powell before Ramis hit the crossbar.

An outstanding Morrison free-kick hit the underside of the bar and Bobby Zamora's rebound was cleared off the line before Benayoun saw red.

QPR assistant boss Kevin Bond: "Wigan carry plenty of threat, plenty of energy and are a good side. At times, they gave us real problems.

"Rob Green had to be at his best and produced a great save right at the end. I thought it was a really good game.

"We started brightly, got the goal, which we always badly needed, and then there was a lot of good football on both sides.

"We are highly delighted to come out victorious and keep a clean sheet and hopefully try to cement our place for the play-offs."

Wigan boss Uwe Rosler: "I think everybody in the stadium, when they are realistic, saw we should have got something out of that game.

"QPR were obviously the team favourite before the season to go up, and the way we played, apart from the first 10 minutes, was very, very good.

"We had more attempts on goal, bigger chances and the clearer chances. I felt our morale, attitude and application was top draw.

"The QPR goalkeeper, for me, was the man of the match. I think maybe Roy Hodgson should have a look at him."