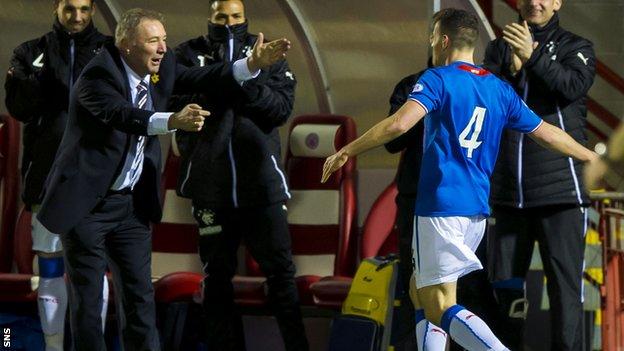 Rangers manager Ally McCoist promised Dundee United a tough encounter in the Scottish Cup semi-final after his side saw off Albion Rovers 2-0.

On 12 April, the Ibrox men host Jackie McNamara's side, who beat the Glasgow team 3-0 in last season's competition.

He said: "We definitely feel that we have a better side with better players.

"That said, you could argue that Dundee United have a better team this year, so there are a lot of questions that won't be answered until the game."

Goals from Fraser Aird and Jon Daly secured Rangers place in the last four after the replay at New Douglas Park.

With Hampden being redeveloped for the Commonwealth Games, the Scottish FA in October chose Rangers' stadium to host the semi-final and had refused United's request to have the tie moved should the Glasgow side reach the last four.

"Their boys play in big stadiums all over," said McCoist. "The majority of boys in their side have played in semi-finals and even some of them played in finals and won.

"So I don't think the Ibrox factor would faze them."

The former Light-blues striker thought it will be difficult to pick a winner, with neither side an outright favourite.

"I don't know," said McCoist when asked to choose a favourite. "I probably would think United, with the experience they have got playing at the top level.

"They have younger boys, but they do play at that level on a regular basis and they have a good record in the Cup against us in the last couple of years.

"It was a really poor start to the game, but that won't have any bearing on the next game."

The Rangers manager was delighted that his side had improved on the performance in the first game against the Wee Rovers.

"It has been a good run to the semi-final so far," added McCoist.

"So it is a real boost for everybody to get the chance to play in the semi-final.

"The main task is done. We got through to the semi-final, which we will look forward to.

"Getting the first goal was a big thing for us. It was a great finish by young Airdy and we were obviously delighted to get a second one and that took the pressure off a little bit."