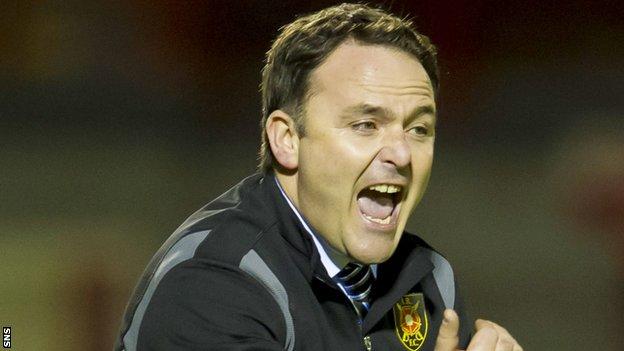 Fraser Aird and Jon Daly punished slack defending to put the tie beyond the Coatbridge men.

That left Ward frustrated his side could not defend both goals better.

"We've had two lapses of concentration," he told BBC Scotland. "Two times we've let the ball come into our box with no pressure on it."

Rovers had a great chance themselves when David Crawford had a goal-bound effort saved by Cammy Bell, but that chance apart, they found it difficult against the Glasgow side.

We've had exposure that we would only dream of. We've had tremendous backing and they can be so proud of the effort the players put in as well

"We just came up short in terms of offering a wee bit more threat in the final third," said Ward.

"It's two occasions over 180 minutes against a full-time team who have got a lot of quality players in there. Unfortunately, that's been the difference.

"I felt they've done themselves immensely proud since the first round against Spartans all the way through and it's something we'll use to build on.

"It's been five months where the club has been transformed from somewhere where people used to associate a lot of negativity, to everything - since the early rounds right through to tonight - has been immensely positive.

"We've had exposure that we would only dream of. The fans, the ones that turned up again tonight, that's over 1300 fans. It was tremendous backing and they can be so proud of the effort the players put in as well."

Ward now has to pick up his men for two crucial games against Elgin City and Annan Athletic as they chase a place in the League Two promotion play-offs.

"They're really disappointed," he said. "I think it's only tonight it resonates how disappointed they are because of the first game, because the chance to do something has gone tonight.

"So they're now thinking back to the earlier game and how close they were in that one.

"But we've got two huge games on Saturday and Tuesday that will define whether we've got something to play for for the rest of the season."