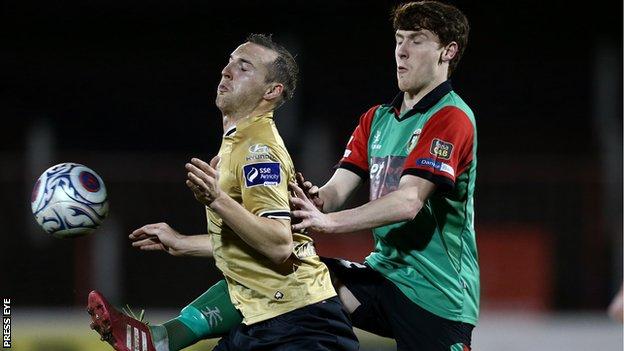 Glentoran have lost 5-1 on aggregate to Shamrock Rovers in the Setanta Cup after the second leg of the quarter-final ended 0-0 at the Oval.

Rovers had all but booked their place in the last four with a four-goal success at Tallaght Stadium in Dublin three weeks earlier,

It means the four Irish League clubs in the All-Ireland competition have fallen at the first hurdle.

Glentoran's exit from the Setanta competition comes a week after they were knocked out of the Irish Cup by Glenavon.

For the Glens, Jin O'Hanlon shot across the face of Barry Murphy's goal after a Curtis Allen cross, and Jordan Stewart sent a long-range drive just over.

Morris denied Zayed on another couple of occasions while Glentoran's appeals that Stephen McAlorum had been fouled in the penalty area were rejected by referee Mervyn Smyth.

Last week, Coleraine, Ballinamallard United and Crusaders all lost out to League of Ireland opposition in the other quarter-finals.