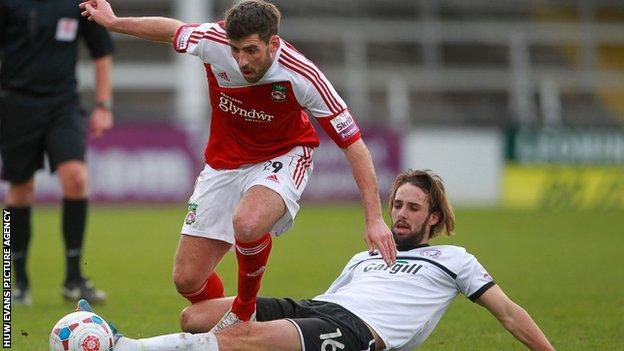 Caretaker boss Billy Barr wants the job and was interviewed on Monday.

The Dragons, who are 17th in the table, host 18th placed Hereford on Tuesday and former Wales captain Horne says the club have not been short of applicants.

"There was an astonishing response to the open advert for applicants," said Horne, who began his career at Wrexham.

"Nobody was considered that didn't enter that open process.

"The one thing that came out of the interviewing process was just how highly regarded Wrexham football club is within the wider community and the football community in particular.

"Also how coveted a job it is and how it's recognised as being a wonderful opportunity for somebody."

Morrell stepped down as manager in February and former Everton and Southampton midfielder Horne says the club had targeted a play-off spot at the end of this campaign.

"We certainly had a budget and an expectancy that we would be in the play off positions," said Horne.

Wrexham's 3-1 defeat at Grimsby Town on Saturday left them 10 points off the Conference Premier play-off places and only 10 points clear of the relegation zone.

Their last victory was at Hereford four matches ago.

Horne did not reveal when an announcement on Morrell's successor would be made but said whoever comes in will have to make changes.

"It needs to be somebody who can bring down the age of the squad," said Horne.

"Somebody who can populate that squad with a type of player that can have success in the Conference and hopefully the division above.

"And somebody who can motivate and develop, because there's no doubt that the profile of the squad at the moment is not healthy.

"It's possibly been part of the problems this season."