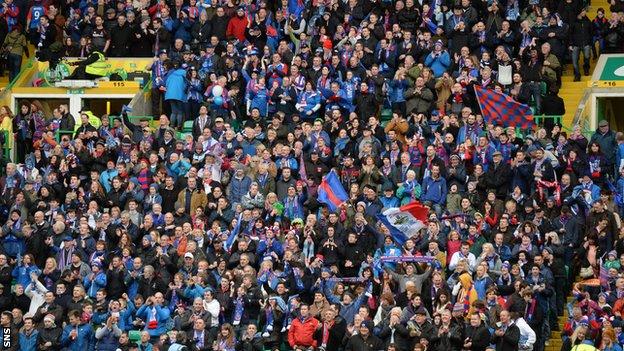 Cameron says he hopes the backing the club received at Celtic Park can spur the club on to more big occasions.

"It was a magnificent effort by so many - including whole families - to make the 320-mile round trip," said Cameron.

"The team and the club would like to express enormous gratitude for their commitment."

Announcing reduced entry for this weekend's Scottish Premiership match with Partick Thistle for all those who bought a Cup final ticket, Cameron has asked fans to take advantage of the offer and welcome home the cup finalists.

"We congratulate Aberdeen, who won a final which could have gone either way," said Cameron.

"But reaching the final, and seeing how much it meant to Inverness, makes us all the more determined to work together with the aim of Caley Thistle figuring in more major occasions in the times ahead.

"The way the whole of Inverness got behind the club in the run-up to the final is deeply appreciated. The business community really got behind us.

"Highland Council made an excellent contribution, working with fans group Caley Jags Together to ensure we had just short of 8000 supporters at the game.

"We thank all who contributed to this exodus, including local bus company D & E Coaches and ScotRail, a fantastic all-round effort."

Caley Thistle sit fifth in the Premiership table, have secured a top-six finish and still have a chance of qualifying for the Europa League.

"Our players will get past their disappointment of the Cup final and our focus is now to finish as high up the Premiership table as we can," added Cameron.

"We look forward to getting a good turnout against Partick Thistle on Saturday to send a 'welcome home' message to our team and to thank them for their efforts."