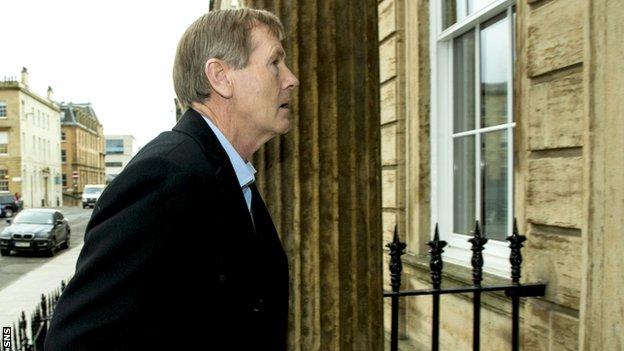 Dave King has set the Rangers board a deadline of four weeks to reveal how they will fulfil their pledge to restore the club to its former status.

This includes providing the financial means "to compete at the highest levels of Scottish and European football".

That commitment was one of a number of issues to which the Ibrox directors agreed following discussions with former director King on Friday.

He has now urged the club's supporters to give the board time to comply.

King, who invested £20m in the club during the Sir David Murray era, has in recent weeks had a debate with the board in the media about the club's future and garnered much support from supporters groups.

Following their meeting with King, the directors released a statement committing to developing a business plan that will enable Rangers to compete with Celtic in the top-flight, to reveal the details of this strategy before fans are asked to renew season tickets, and that Ibrox and Murray Park will not be used as security against any loans.

King believes that, since Rangers International Football Club is a publicly limited company, any statements must be adhered to, or any change to that strategy must be announced.

He has responded to the board's statement by advising fans to hold the directors to account before the end of the 120-day review that the chief executive, Graham Wallace, initiated following the RIFC annual meeting in December.

Wallace has consistently said that costs need to be brought into line with reduced revenue streams in the lower divisions, something that King believed would leave Rangers unable to compete with Celtic.

The South Africa-based businessman wants to lead a fresh round of fundraising through a new share issue, which Wallace has previously said would only be held in the medium term. The board is now obliged to reveal a business plan that will allow investment in the team.

King said: "The more important issues I raised at the meeting were the lack of transparency on the financial position of the club; my concern that the board was operating in a manner that would consign us to being permanent also-rans when compared to Celtic; fans could not be expected to pay for season tickets while uncertainty continued around the board's ambition and funding; my concern that Ibrox and Murray Park would be used as security for some form of financing.

"The board has affirmed that it regards competition with Celtic and in Europe as being its continued aim and that this outlook will be reflected in the business review that will be published within the next month.

"Crucially, that will allow fans sufficient time to consider the review prior to investing in season tickets, but it is also important that the board has now confirmed categorically that they will not use Ibrox or Murray Park as security.

"This public commitment is significant. Statements from a public company board are intended to be relied upon, so in a couple of weeks we can expect a business review that will reflect the board's ambition and a funding plan to achieve this.

"We can also rely on the fact that, if circumstances change, the board would be bound to advise the public in advance of this."

King met shareholders and supporters last week, with the Union of Fans then following his lead and agreeing to set up a season-ticket trust fund to allow fans to pool their renewal money and use it as leverage.

Supporters will press ahead with this plan, which involves the UoF gaining, in return for releasing the funds, security over Ibrox and Murray Park, which are the main income stream for the club.

Having opened discussions with the board, King is now advocating that the supporters give the directors time.

King also insisted that the board's decision to grant the shareholders, Sandy Easdale and Laxey Partners, security over the Albion car park and Edmiston House in return for a £1.5m loan as confirmation that they acknowledge it a high-risk arrangement for the two lenders.

As a result, he believes that season ticket money should be ring-fenced to protect it.

"Mr [Norman] Crighton, on behalf of the board, made a forcible argument as to why the board approved the terms of the Laxey loan," King said.

"The board considered that a combination of legal risk and the current financial position justified the loan terms.

"I replied that a consequence of the board's view of the high risk to anyone advancing funds to the club is the board's fiduciary responsibility to ring fence any season ticket money that is received unless sufficient committed financing is in place at that time. The board did not agree with me on this logical consequence.

"Let us give the board time to comply with its commitment.

"I advised the board that I would wish to be a part of the required fundraising as a component of a united fan group investment vehicle.

"This will require further discussion after release of the review in the next month."