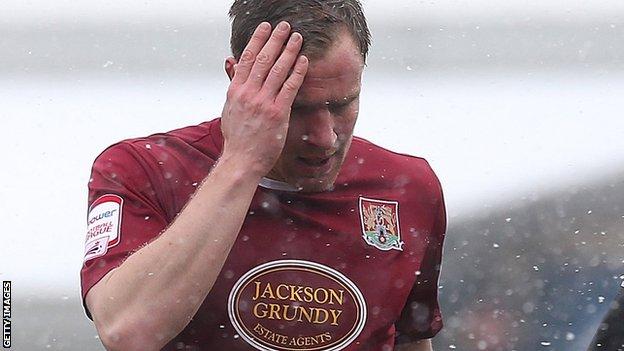 Northampton defender Kelvin Langmead has returned to first-team training after 10 months out with a knee injury.

The 28-year-old initially suffered the problem against Oxford in March 2013.

And after returning for the League Two play-off semi-final against Cheltenham he then had to undergo surgery which ruled him out for the rest of the year.

"He's doing the majority of the things [the first-team are doing] apart from the small-sided game we've had.

If you're putting a bet on anybody in that group to do it, you'd certainly put your money on him [Langmead]

"He's working extremely hard. Whether he's available before the end of the season, everyone would love that to happen. If he's not, he's going to be a in good place going into next year."

Club captain Langmead, who scored eight goals in 47 appearances as Cobblers skipper in 2012-13, is contracted for another year at Sixfields.

But Wilder says he will not rush the former Peterborough defender back into their fight against relegation.

"There has to be a sensible discussion and decision," he said.

"There isn't any risk worth taking that puts a boy's career at risk, so I won't be doing that. When he's ready and feels fit, he'll get back involved.

"We've got seven weeks of the season so it will be cutting it fine, but who knows.

"He should be doing a five-week pre-season and playing seven or eight pre-season games. He's had over a year off, and he's got possibly two or three weeks and one or two games to get ready for first team.

"It's going to be a struggle, but if anybody is going to do it, and you're putting a bet on anybody in that group to do it, you'd certainly put your money on him."

Meanwhile, injured defender Joe Widdowson will hope to feature for the first time since February when Northampton make the trip to Morecambe.

"Joe's got a lot closer so possibly he might be involved on Saturday, which is good news for everybody," said Wilder.