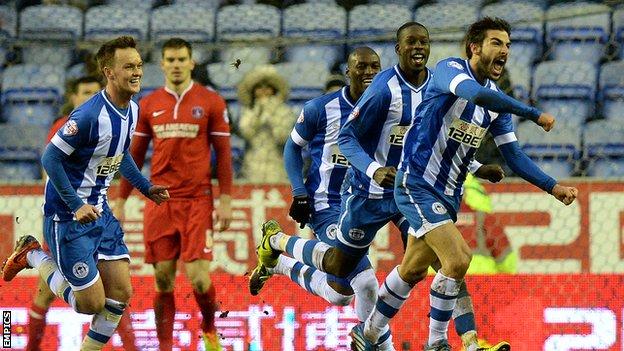 Wigan manager Uwe Rosler has set his side a two-points-a-game aim to finish in the Championship play-offs after eight straight victories.

The Latics' 3-1 win at Ipswich moved them up to fifth in the table with two games in hand on third-placed Derby, who are five points ahead of them.

Matches in bold played at home

The run of eight wins has included six away from home.

"This is not important for me where we are. We're on track in terms of getting two points per game," said Rosler.

"Overall our players played at least a seven out of 10 [against Ipswich] and that is what you need to win away from home.

"It's the way you have to play in the Championship to get into the play-offs and aiming for promotion."

Wigan's fine form has also seen them secure a 2-1 victory at Man City in the FA Cup quarter-finals.

Rosler, 45, joined the Latcis at the start of December from Brentford when the Cup holders were lying 14th in the Championship.

The former Manchester City striker has had to deal with a number of injury problems in recent weeks with long lay-offs for Ben Watson, Chris McCann and Roger Espinoza.

Wigan could have another problem to deal with in defence at Leon Barnett was taken off at Portman Road but Rosler was more than pleased with his replacement.

"Rob Kiernan stepped in and did a really good job," Rosler told BBC Radio Manchester. "I had options but I went for Rob and he confirmed what I have seen and that is the reason I didn't let him out on loan.

"I really think he can be an important players for us from now until the end of the season.

"There are options for us and we have to make sure we are choosing the right players for the right games.