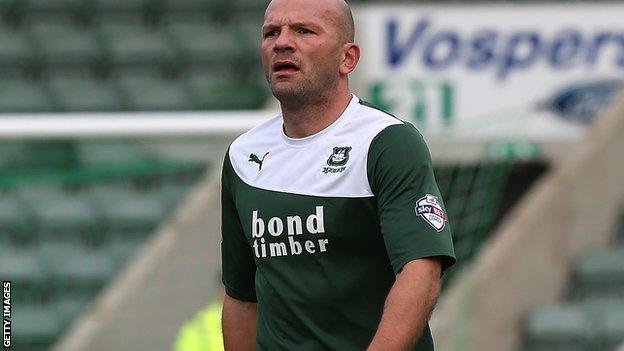 Veteran centre-back Guy Branston says he still has plenty to offer as a player after being released from his contract at Plymouth Argyle.

The 35-year-old has played 13 times this season but an ankle injury has kept him out of action since December.

Branston, who has played for 19 clubs and made 27 moves during his career, said he would be seeking a new club for next season.

A scan on Branston's ankle revealed he would be out for the rest of this season anyway, leading him to agree a deal to leave Home Park with immediate effect.

"It's not like it's a serious knee operation or a dodgy back," added Branston.

"I'm just trying to do the right thing and this will give me the chance to be doing the rehab work at home and look at things I'm genuinely interested in and passionate about; my businesses, media work and the managerial or coaching career I hope to get in the future.

"When you're under contract you have to go by what the gaffer says and you respect that but now I'm guided by what Guy Branston says.

"I definitely think I've got plenty to offer as a player. I played well enough before the injury and then it's gradually got worse and now I've written the season off and want to get myself right for next season. I want to be a Football League player for one more time.

"I've been struggling for it for the last season if I'm honest. It grinds you down when you can't play to your potential - it was seriously affecting my balance and mobility. People were going past me that shouldn't be and that was making me more and more frustrated in training and games and it had to come to a halt."

Branston has business interests in a website which acts as a platform for players to showcase their skills and in an app aimed at athletes, but said his priority is to stay involved in the game as a player.

"It's always about getting fit first," said the former Torquay, Rotherham and Kettering defender.

Branston had two spells at Argyle, rejoining the club on loan in January 2013 and earning praise from manager John Sheridan for his part in keeping the club up in League Two.

"I've been planning it since I found out about the scan and spoke to the gaffer and got it all organised. I think it was best for the football club and best for me."

Sheridan said he expected Branston to succeed in whatever he goes on to do in the future.

"He's a great lad - he did brilliantly for me last season and he was a really big part of us staying up," Sheridan told BBC Radio Devon.

"I've got a lot of time for him and he's got other avenues to look at now.

"He's a confident lad and I've said to him that if I can help in any way in the future he only needs to pick the phone up."