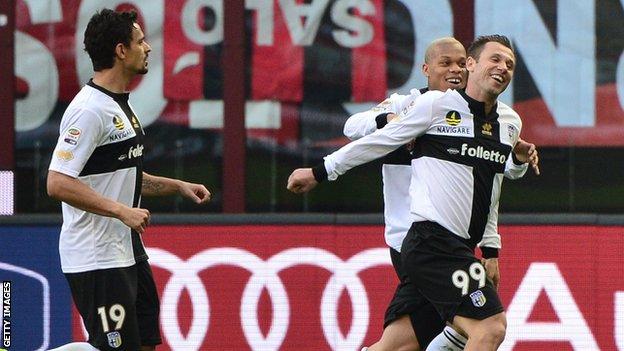 Parma striker Antonio Cassano believes he is in fine shape to win a place in Italy's World Cup squad - after losing 10kg by eating less focaccia.

The ex-AC Milan striker, 31, netted twice in Parma's 4-2 win against his former club on Sunday.

"I can't do better than this," he said when asked about being recalled by Italy boss Cesare Prandelli.

"I've lost 10kg to go to Brazil. I'm on a diet and I've stopped eating focaccine, except for once a week."

Focaccine is a mini version of the flat oven-baked Italian bread, which is popular throughout the Mediterranean country. Cassano claims to have lost 10kg (22lbs) by cutting it out of his diet.

He added: "I don't know if there's still a chance but I'm doing everything to give Prandelli something to think about."

Cassano, who also counts Real Madrid and Inter Milan among his former clubs, has not been picked by Prandelli since Euro 2012.

But, after 11 Serie A goals for Parma, he is hoping to be given the opportunity to rekindle his partnership with Milan forward Mario Balotelli for the Azzurri in the summer.

He missed the 2006 World Cup after struggling for form at Real and fell out with national coach Marcello Lippi ahead of the 2010 tournament.

"I have never played at a World Cup and it's something I'd love to do. I would be the happiest man in the world if it happened," said Cassano, who has scored 10 international goals in 35 caps.

Under ex-Italy international Roberto Donadoni, Parma have climbed to sixth in Serie A following an unbeaten 16-match run.

The two-time Uefa Cup winners will clinch European qualification for the first time since 2006 if they finish in the top six of Serie A.