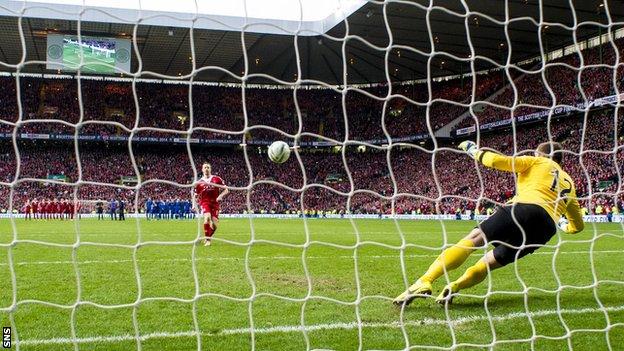 There was Aberdeen joy, of course. Mountains of it. Ground-shaking joy.

Joy spilling out of the grandstands. Joy on the faces of players and players' families, on the faces of wives and children as they made their way around Celtic Park at the end, waving madly at the massed ranks of invading Dons. Delirium dressed in red.

But joy wasn't the only emotion. You have to wonder if it was even the dominant emotion. At the end, it was hard to know where to look - at the players on the pitch or the punters in the stands.

Both were a memorable sight, utterly spent, as if they'd just emerged from an hour whizzing in the world's biggest tumble dryer. Their senses scrambled.

Slapstick abounded, too. Stewart Milne, the Aberdeen chairman, said he'd had a splitting headache all day. At the end of extra-time, and before the tempest of the penalty shoot-out, he swallowed a tablet to ease the pounding and the pill got stuck in his throat.

Imagine had Barry Robson, Aberdeen's first penalty taker, caught sight of Milne in that moment. When even the chairman is choking then you know you've got a problem.

"I had to run off to get a glass of water," Milne said, live on BBC Radio Scotland, in the aftermath. "And then we had the penalties." Only he didn't just say "…the penalties." There was a word between "the" and "penalties" that had his interviewer, dear old Chick Young, scrambling to apologise to the listeners, an f-bomb that spoke to a pressure valve being released.

Those who know him best say that Milne doesn't normally swear. But this wasn't a normal day. It was a day of agricultural football and mind-bending tension, a boxing match where two opponents exhausted each other and their supporters not by the weight of their attacks but by their almost suffocating desire to win.

Willo Flood summed it up. Didn't matter that the final was rubbish, he said, in his thick Dublin accent that even the most Dublin of Dubs find quirky. Didn't matter that Aberdeen had played miles below par or that they had put the heart sideways in each and every one of their supporters. Flood basked in the luxury of success. That was all that counted. Get over the line and get out of town. End of story.

"How are you going to celebrate, Willo?" he was asked.

"I think we'll all be comatose tonight," he said.

Quote of the season right there.

The shootout saw Aberdeen at their coolest at precisely the time when the heat was at its greatest. It was a microcosm of the strides this team has made. Four spot-kicks and four emphatic finishes, three sending Dean Brill in the Inverness goal the wrong way and the final one, the Adam Rooney clincher, drilled high and handsome beyond the goalkeeper's reach.

Four out of four to match the six out of six in their brush with the bad old days in their first match in this competition against Alloa. If that fractious victory against Paul Hartley's old team was the first suggestion of changed days at Pittodrie then this day was final confirmation of it. Nineteen years without a trophy. History rewritten now.

They say the first one is the hardest to win. Poor Inverness can tell you all about that. We will remember the shootout and the glory at the death, we will remember the madcap scenes and the terrific Aberdeen support long after the awfulness of the game is forgotten. But we should also remember how damn close John Hughes's team were to changing the narrative of the day.

With three minutes left of normal time a roar went up from the Inverness end that would have curdled the blood of every Don at Celtic Park.

When Andrew Considine wrestled Richie Foran in the Aberdeen box there was an expectation of a penalty. It happened down the end of the ground where the Inverness fans were housed. Under their noses. They could smell victory.

So much of what Inverness did happened to work. This is a team that is still recovering from conceding five goals in back-to-back games, a side whose defence has been too vulnerable and its attack too blunt in recent times. They hadn't scored a goal in three matches coming into this final, so Hughes had some thinking to do. And he almost pulled it off.

Hughes cranked up the intensity in the preamble, wailing about the myriad injustices perpetrated against his team, trumpeting about their no-mark status as the team that nobody wanted to win. The bogey men to Aberdeen's Cinderella story.

This was all mind games, laced with some truth. It was a psychological ploy designed to remind the Dons of the horrendous pressure they were under and what a spectacular failure it would be if they were to lose in front of so many of their own people.

Hughes sent out his team to contain and frustrate, to stay in the game long enough for Aberdeen to fret and be spooked by the possibility of defeat.

It nearly came off. Had the penalty shout been heard and the spot-kick put away it would have been Scottish football's own version of the rope-a-dope.

And the Red Army would have returned home like mice not lions.

Instead, they went roaring back up the motorway to a place reborn by Derek McInnes and a new breed of player who stood up when it mattered. The final might have disappointed, but the drama that happened around the football was unforgettable.