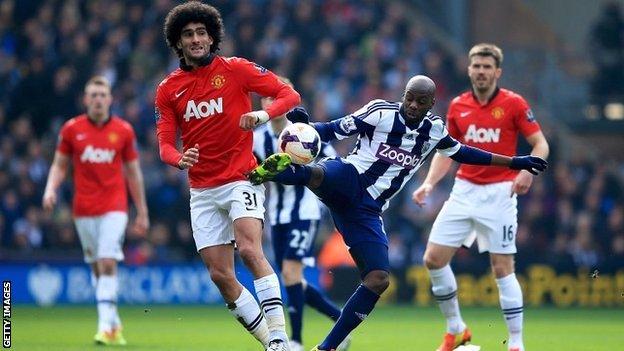 Manchester United midfielder Marouane Fellaini believes his team can cause Liverpool problems, despite coming up against the Premier League's most fearsome attack on Sunday.

Liverpool have scored 73 league goals this season, more than any other side.

"We have a lot of quality in attack - Juan Mata, Wayne Rooney, Adnan Januzaj and Robin van Persie," Fellaini said.

"They give a lot of solutions in attacking positions so that's great that they have that understanding."

"Defensively Manchester United are poor. Can they stop Liverpool's attack? I don't think so.

"The great thing from Liverpool's point of view is that they are so good on the break - they can counter-attack with pace and, if they play well, I see them winning comfortably."

But they go into the north-west derby having beaten West Brom 3-0 in their last game.

Former Evertonian Fellaini, who who won just one of the 10 Merseyside derbies he has played in, hopes United can end their poor form at home, having won five of their last 10 games at Old Trafford in all competitions.

The Belgian added: "When you win, everyone is always happy and we have to keep going like this.

"It was good for our confidence. We have done well away from home but we need to win at Old Trafford. It's important for our supporters."

The fiercely-contested fixture precedes a critical period of United's season; after hosting Liverpool, United face Olympiakos at Old Trafford in the second leg of their last-16 Champions League tie next Wednesday before another home game against rival Manchester City the following Tuesday.

"It's the sort of match you want to be involved in," defender Nemanja Vidic told United Uncovered.

"United against Liverpool is not just an English derby, it's worldwide. It's not just rivalry between two big clubs, it's between two cities. You feel that on the pitch - the tradition of the two clubs.

"Winning is a great feeling and losing is the worst feeling. But it's being watched all over the world and you want to be part of the show and part of the history."

Vidic has enjoyed mixed fortunes against Liverpool throughout his time at United. The 32-year-old captain scored the winning goal against Brendan Rodgers' team last January, but he has also been sent off three times against the Reds.

But since confirmation of the Serbian's move to Italy, Moyes preferred centre-backs Chris Smalling and Phil Jones in the team's last game - a 3-0 win over West Brom.

Vidic has been used sparingly this season, but started as United earned clean sheets away at Arsenal and at Crystal Palace last month.

"I'm pleased with the young boys," the United manager said. "We've had great service from Rio [Ferdinand] and Vida and we're using them because we need their experience.

"With the amount of games we have coming up we're going to need them to be fit and healthy."