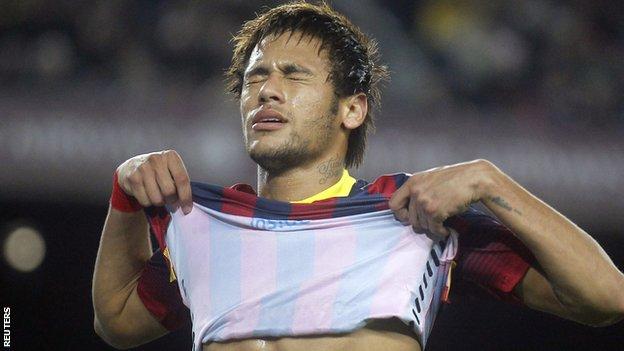 Brazil striker Neymar has been affected by the controversy surrounding his £48.6m transfer to Barcelona from Santos, says coach Gerardo Martino.

He has scored once in 2014 ahead of Sunday's La Liga visit of Osasuna.

With the initial fee paid in the summer, plus a signing-on fee, wages during his five-year deal, agents fees and an £11.2m tax payment, Neymar has cost Barcelona £106.8m

Sandro Rosell resigned as club president as he faces legal action for misappropriation of funds, while Barca face tax fraud charges over the deal.

"If I had to give an explanation for [his form] then I would say it is to do with that," said Martino.

Neymar was sidelined by an ankle injury for a month at the start of the year and Martino thinks that has also played a part in his lack of consistency.

There were some whistles from the Nou Camp crowd when he played in the win over Almeria two weeks ago and more from a section of the fans when he was substituted in Wednesday's Champions League win against Manchester City.

"In his best moments he has played on the left or as a centre-forward and the other day he was on the right, where I also thought he did well," said Martino.

"When a player has been out injured a month it is not easy to get back to their best form straight away. It is not like a day, or three days but a month."

Did you know? Over 14,000 Brazil fans signed a petition demanding that Neymar be called up for the 2010 World Cup finals after he was not named in then head coach Dunga's squad. They were unsuccessful.

Barcelona entertain Osasuna on Sunday buoyed by their win over City but seeking an upturn in their league form, having lost two of the last three La Liga matches to drop to third place.

Osasuna held Barca to a scoreless draw in October, and Martino said they needed to ensure they remained tight defensively in the absence of injured centre-backs Gerard Pique (ankle) and Carles Puyol (knee).

Martino said: "Osasuna are a side which causes problems for all teams, especially at home. They work hard and are difficult to face but we mustn't think about the City game and having qualified for the next round, and concentrate on the league.

"It is not difficult to motivate the players as they are used to competing. We can look back on two matches, the one against City and the other a week ago and we need to improve the performance of that against Valladolid."