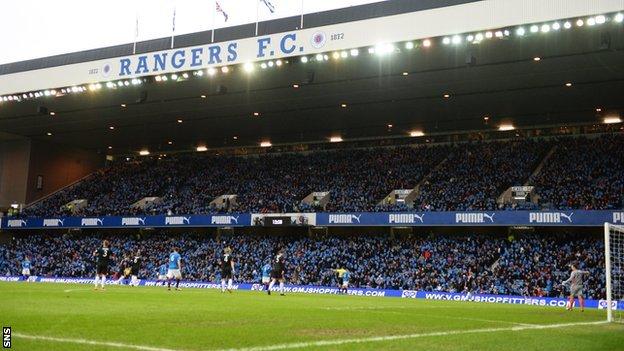 The Scottish FA have refused Dundee United's request to move their Scottish Cup semi-final to a neutral venue, should their opponents be Rangers.

In October, Ibrox was named as the venue for both semi-finals, with the final to be held at Celtic Park.

United chairman Stephen Thompson said: "If it is to be Rangers, then we are not happy with the fact that it is not a neutral venue.

"A semi-final or final should be at a neutral venue."

The Tannadice club made an official request to the SFA, but say the governing body have rejected this, citing examples from Uefa as a precedent for a club playing a semi-final on its own ground.

Thompson added: "This of course is all dependent on the result of the Albion Rovers v Rangers replay, there is no guarantee of that result.

This is not an issue with Rangers, it's with the SFA and putting commercial and sponsors interests before that of fans.

"This is not an issue with Rangers, it's with the SFA and putting commercial and sponsors' interests before that of fans.

"We wanted to play the match at Celtic Park but that was flatly denied."

Thompson also said that he would not be sitting in the directors' box at Ibrox for the match if United do meet Rangers, but would instead be in with his own supporters.

An SFA spokesperson said: "The clubs were informed of the venue just after the first round of the cup, due to Hampden Park being out of commission because of the Commonwealth Games.

"There were no issues raised then at that early stage."

United say they have been given a maximum ticket allocation of 13,100 for the semi-final at Ibrox if their opponents are Rangers, having initially been offered only 11,000 tickets.