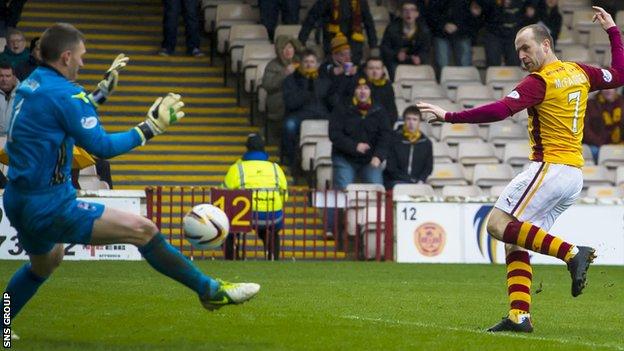 Motherwell survived a late onslaught from Ross County to remain hot on the heels of Aberdeen in the race for second place in the Premiership.

James McFadden followed up a powerful strike from Iain Vigurs to knock the Steelmen in front on 48 minutes.

And the home side doubled their lead in similar fashion when John Sutton was first to the loose ball as Mark Brown kept out Craig Moore's swerving shot.

A volley from Yann Songo'o ensured a tense finish but 'Well held on.

With the league's top six all winning this weekend, Stuart McCall's side remain level on points with Aberdeen, although they have played one more game than their rivals.

It was a sixth win in their last seven league matches at Fir Park but it was a nervous finish for the home fans as Richie Brittain hit the post and Songo'o went close to a second goal.

With both starting line-ups unchanged, Motherwell enjoyed the larger share of early possession, with the movement of McFadden and Sutton troubling the visitors.

However, the first good opening fell to County as defender Stephen McManus misjudged Brown's long kick-out and glanced the ball towards his own goal. The alert Jordan Slew ran on and cracked a shot with power but it flew the wrong side of the post.

Motherwell responded with two chances in two minutes. Shaun Hutchinson failed to get a full connection on Lionel Ainsworth's cross and sent his header wide while Brown had to be at his best to stretch out and claw the ball away from McFadden's deft flick.

The first half closed with Motherwell in the ascendancy and Lasley shot wide following good work from Ainsworth.

The home side took only three minutes of the second half to break the stalemate as Sutton fed the ball back to Vigurs to strike from 25 yards.

The former County midfielder's stinging shot was saved by Brown diving across to his left but the keeper could do nothing as McFadden pounced quickly to find the net.

The lead was extended on the hour as Moore, on for McFadden, conjured up a swerving effort that Brown could only push away and Sutton was on hand to apply the finish - although he lifted the ball higher into the net than he may have intended.

It has been a fixture that Sutton has flourished in this season - netting in all three games, scoring five goals in the process.

Motherwell looked comfortable but County stuck to their task and Brittain almost pulled a goal back after 78 minutes when he sent a shot across Gunnar Neilson, beating the goalkeeper, but striking the foot of the post.

The Staggies did get on the scoresheet with nine minutes to play when Songo'o knocked in a Graham Carey corner for his third goal of the season, sparking a frantic push for an equaliser from the visitors.

And it was Songo'o who came closest when he skilfully brought down a ball into the penalty box and hit a shot on the turn but it was just off target.