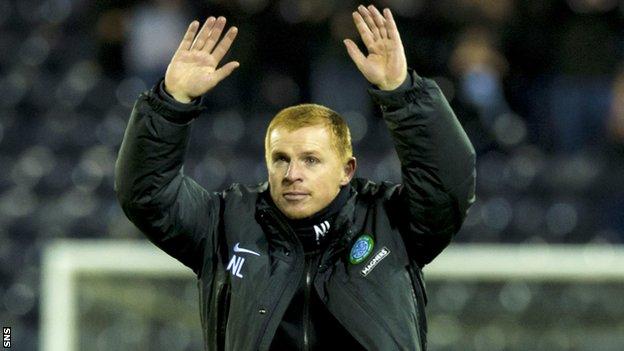 Celtic manager Neil Lennon is determined to keep Kris Commons at the club after his hat-trick fired them to a 3-0 win at Kilmarnock.

The midfield talisman took his tally for the season to 26 with all three second-half goals.

"Kris has had a brilliant season as he has now for the last couple of seasons, and goalscorers make the difference," Lennon told BBC Radio Scotland.

In-form Commons signed a three-and-a-half year contract in January 2011 and Lennon has stated that the club will exercise an option to extend that deal.

"We were sensational in the second half and Kris is at the forefront of that," said Lennon. "He is so important to the way we play. We set the team up to suit him."

Celtic struggled to break down the Ayrshire men in the first half, with an offside effort from Anthony Stokes the furthest forward the visitors got.

However, Lennon was delighted with how his side responded after the break, with Commons scoring twice in two minutes then completing his hat-trick with a long drive into the corner to move the champions to within seven points of the Scottish Premiership title, with 10 games remaining.

"It was just the final third, we were a little bit short I felt," he said. "We had good control of the game - the second half, all round, I thought was a sensational performance.

"I thought we were a little bit slack. You only have to tell them once and you get a response. Kris got the breakthrough for us and then after that the football was fantastic.

"The football, the energy, the quality. I'm just thrilled with that second half and that's as good as we've played away from home for a wee while now.

"And, the kid [Liam Henderson] making his debut tonight, he just grew into the game and he was a real bonus tonight. He'll get a lot of confidence from that.

"He's cultured, and athletically he's a very fit boy. He's got a fantastic attitude for the game which you should expect for someone of that age, but he can certainly play football.

"It didn't faze him, and we didn't feel it would faze him, because he's been with us for a wee while now. We've got high hopes for him and he's still growing - he's only 17.

"It's great to see one of the academy boys coming through and playing like that."

He said: "I thought Brown was awesome. I was saying in there I thought I was a good midfield player, but he's just frighteningly good at the minute.

"Just from start to finish I thought he was magnificent.

"There's a few of them there I would take my hat off to this season."