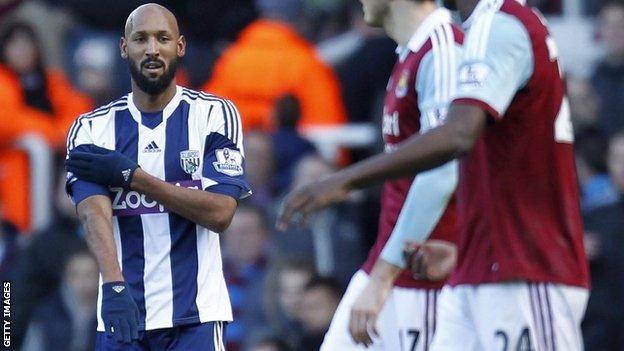 West Brom are sacking Nicolas Anelka for gross misconduct after the striker announced he was quitting the club.

Anelka wrote on social media he was leaving with "immediate effect" after failing to reconcile differences with Albion over his 'quenelle' gesture.

The Frenchman, 35, was banned for five games and fined £80,000 by the Football Association for making the sign after scoring against West Ham in December.

The club is sacking him for his conduct that day and his social media outburst.

They have given him 14 days' notice of the termination of his contract.

He had been suspended by Albion while the club carried out its own internal investigation.

Earlier on Friday, Anelka used social media to announce he was leaving the club immediately.

He wrote: "Following discussions between the club and myself, certain conditions have been set for me to rejoin the group, which I can't accept.

"In order to preserve my integrity, I've terminated my contract with West Brom with immediate effect."

However, West Brom responded by releasing a statement saying "the termination was invalid as it was not conducted under the correct legal process".

The statement also detailed the conditions Anelka needed to meet to enable his club suspension to be lifted.

It read: "The club required Nicolas Anelka to apologise to it, its supporters, sponsors and the wider community for the impact and consequences of his gesture made on December 28 and secondly, that he accept a substantial fine.

"The club considers the conduct of Nicolas Anelka on December 28, coupled with his purported termination on social media, to be gross misconduct."

The striker, who joined Albion in the summer on a 12-month deal, would only have been eligible to play in Albion's final five Premier League games due to his ban.

But with his West Brom career now over, he made 12 appearances, scoring two goals - both in the game against West Ham.

He was given the punishment by the Football Association's independent regulatory commission for making the controversial gesture, described as an "inverted Nazi salute".

He denied his use of the sign was intended to be anti-Semitic, and the commission reported it did not find he was "an anti-Semite".

However, Anelka claims he made the gesture in support of his friend Dieudonne M'bala M'bala, a French comedian who has been convicted seven times of anti-Semitic crimes.

The FA had initially wanted a tougher punishment for the player but opted not to appeal against the decision.

Anelka, who also did not appeal against the ruling, is due to begin his five-game suspension in Saturday's Premier League game at Swansea.