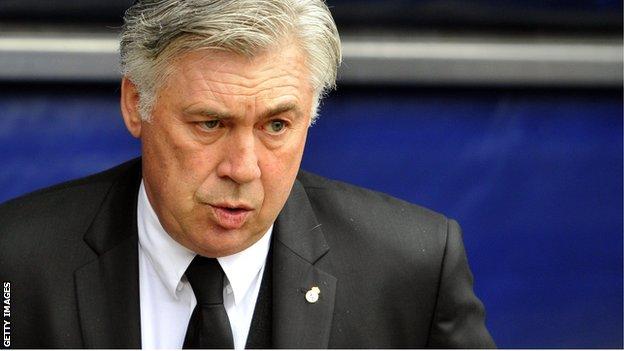 Real Madrid coach Carlo Ancelotti believes the Spanish title race will not be decided until the final day of the season.

Leaders Real are three points ahead of Atletico Madrid, while Barcelona are a point further back, with 11 games left.

Defending champions Barca host Atletico on 17 May, as Real welcome Espanyol to the Bernabeu.

"The players are aware that La Liga will be decided in the final match of the season," said Ancelotti.

"We have to be very careful about all the matches. There is a good philosophy and that is the story of the lion and the gazelle," said Real boss Ancelotti ahead of Saturday's match at Malaga.

"It does not matter if you are the lion or the gazelle, all you have to think about tomorrow is running."

The Italian takes his team to Malaga on Saturday before arch rivals Barca travel to Madrid on 22 March.

Real have not been beaten since a 2-1 defeat at the Nou Camp in October, a run stretching 29 matches in all competitions.

And he insists the forthcoming 'El Clasico' will not affect his team selection at mid-table Malaga.

"The team is focused on Saturday's match and not thinking about anything else," said the former Chelsea, AC Milan and Paris St-Germain coach.

"Thinking about other things is not good. We have an important match and we are only thinking about putting in a good performance.

"I will put out the best team possible without thinking about the possibility of yellow cards and suspension."

Meanwhile, Atletico captain Gabi says his club are "excited" to be challenging illustrious rivals Real and Barca for their first La Liga title since 1996.

"It has been an amazing effort, from the players to the coaches, to fight against the most powerful rivals. Now it is time to fight to the end," said the 30-year-old midfielder.