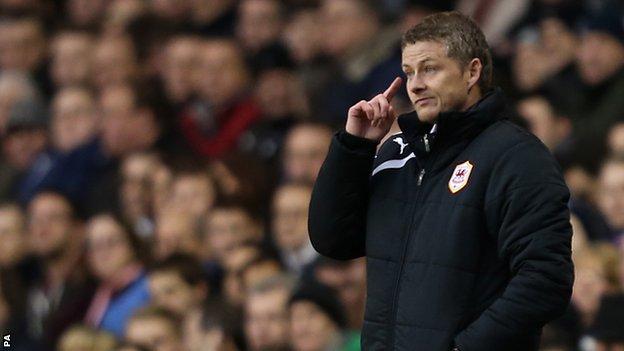 Ole Gunnar Solskjaer wants Cardiff City to emulate Wigan Athletic's exploits of 2012 in their bid to stay in the Premier League.

Wigan won seven out of their final nine games in 2011-12 to stay in the top flight.

The Latics were managed at the time by Roberto Martinez, now boss of an Everton side Cardiff face on Saturday.

"If we can get on the same kind of run we'll stay in the Premier League," Solskjaer said.

"We know it will take everything we've got to get where we want."

Wigan Athletic maintained their Premier League status at the end of the 2011-12 campaign following a late-season revival which included wins over Manchester United and Arsenal.

Everton are currently seventh in the Premier League table, having lost only once at home this season.

Solskjaer says the trip to Goodison Park will be daunting, but he has been buoyed by last Saturday's vital win over fellow strugglers Fulham.

Cardiff are now only in the Premier League's relegation zone on goal difference with nine games of the season remaining.

"We hope we've turned a corner in terms of belief and performances and we're still in with a shout," Solskjaer said.

"We've had a bad spell, but luckily teams around us haven't really done that great. All the other results have helped us as well.

"I see these lads now, they really want to stay in this league."

Defender Ben Turner is a doubt for Saturday's game because of a hamstring injury he suffered during the win over Fulham.

He could be replaced by Spanish defender Juan Cala, who is back in contention after recovering from a stomach bug.